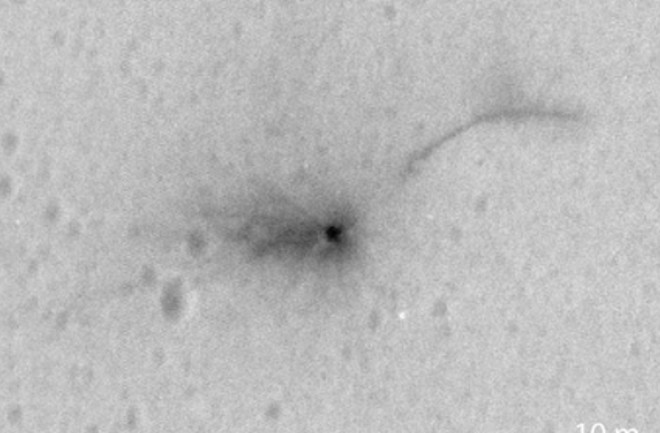 An image of Schiaparelli's landing site. The dark streaks are consistent with an impact crater. (Credit: NASA/JPL-Caltech/Univ. of Arizona) The fate of the European Space Agency's Schiaparelli lander is sealed.

An image of the likely landing place of the heat shield. (Credit: NASA/JPL-Caltech/Univ. of Arizona) An image taken Tuesday by NASA's Mars Reconnaissance Orbiter reveals a series of impact crates strewn about the expected landing zone of the craft, with no sign of the lander itself. The craft's back shell and parachute appear at the bottom of the image, while the heat shield rests in what appears to be several fragments at top right. A dark crater at the upper left is the only evidence of the craft's landing. The picture was taken by the High Resolution Imaging Science Experiment (HiRISE) camera on the orbiter, and shows three impact sites within about a mile of each other. The crater made by the lander is estimated to be about eight feet in diameter and around a foot and a half deep. An earlier image of the site captured by the Context Camera on NASA's orbiter showed evidence of a dark crater, but didn't provide enough detail to draw any firm conclusions. This latest view has achieved a resolution of about 30 centimeters for every pixel, and all but confirms Schiaparelli's demise.

The full image taken by the Mars Reconnaissance Orbiter. The back shell and parachute are at bottom left, the heat shield is at top right, and the Schiaparelli crater is at upper left. (Credit: NASA/JPL-Caltech/Univ. of Arizona) The lander was supposed to make a soft landing on the Martian surface on Oct. 19, using a combination of a heat shield, parachute and rocket thrusters to slow its descent. A probable software error caused the craft to malfunction, jettisoning its parachute too early and firing its thrusters for only three seconds. The result was a free fall from over a mile above the planet, and a landing at around 180 miles per hour — far from a soft landing. Schiaparelli was still able to return valuable data for the first few minutes of its flight, and the experiment should hopefully provide valuable insights for future missions as well. ESA's Trace Gas Orbiter, which arrived at Mars along with Schiaparelli, is currently functioning as expected. NASA hopes to have more images of the crash site soon, which should provide a stereo view that would confirm the presence of a crater.