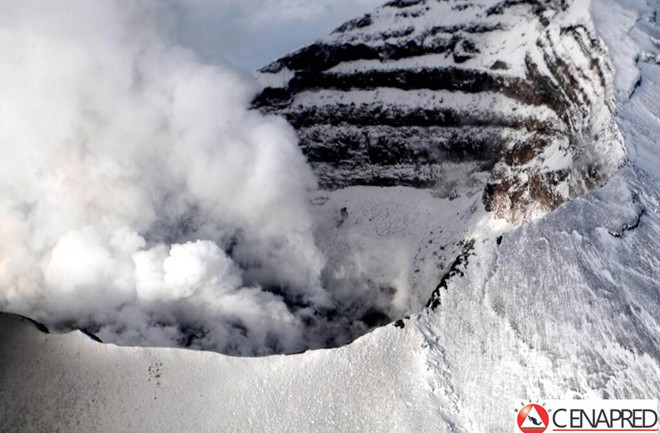 Shot of a new lava dome seen on July 7, 2013 forming within the main crater at Mexico's Popocatépetl after a week on continuous strong ash emissions and explosions. Image: CENAPRED.Programming Note: I've now entered summer crunch time. Between lab time and field work with my students over the next month along with my own projects and manuscripts that need to move forward before the start of the next school year, I am going to be busy with a capitol B. I've going to try to keep up with posts as events occur, but I can't guarantee that I can update as quickly and frequently as I normally do, at least not until this stretch is over. Hopefully this helps dispel that myth that someone college faculty have the summer "off" ... ! Onwards to the update! As noted in this space last week, Popocatépetl has had an active week, to the point that a multitude of flights in/out of the international airport in Mexico City were cancelled. This huffing and puffing at Popocatépetl, with ash plumes reaching 3-4 km above the volcano, has prompted the elevation of the alert status to Yellow-Phase III. This means that the eruption at the volcano has moved from sporadic explosions (Phase II) to frequent small to intermediate explosions, usually caused by a dome collapse (that can generate pyroclastic flows). Tremor is almost constant at the volcano, along with constant emission of ash-and-steam from the summit vent. An overflight of that vent on Sunday showed that a new lava dome has formed within the crater during the past week's activity (see above), meaning a new sequence of dome growth (and eventual collapse) is in full swing. As magma rises up under the active vent, a plug of lava forms (as the lava dome). The pressure rises under the plug and it is eventually destroyed (either by collapse or explosion), leaving the magma underneath to feel the drop in pressure, prompting an explosive eruption. Once the vent is clear, new lava can begin to fill in the vent to form another new dome and the cycle continues. This type of eruption is common at many arc-related volcanoes like Popocatepetl like Mount St. Helens, Soufriere Hills and Merapi. You can check out this USGS page on this same pattern that occurred at St. Helens after the catastrophic 1980 eruption or if you want to get cozy with a dome, check out this video of the dome at Mexico's Colima taken in 2008 -- rubbly piles of extruding lava within the main crater vent. The collapse of these domes can be one of the most dangerous and unpredictable events at a volcano as the extrusion of the dome isn't particularly violent, but the collapse can generate large pyroclastic flows. A collapse of a dome at Unzen killed the famed volcanologists Maurice and Katia Krafft and Harry Glicken in 1991. The dome at Popocatepetl likely needs to get larger so it extends out of the crater at the summit vent (see above) before it can generate a large dome collapse pyroclastic flow, but all of this means that Popocatepetl needs to be taken seriously in this new phase of activity.