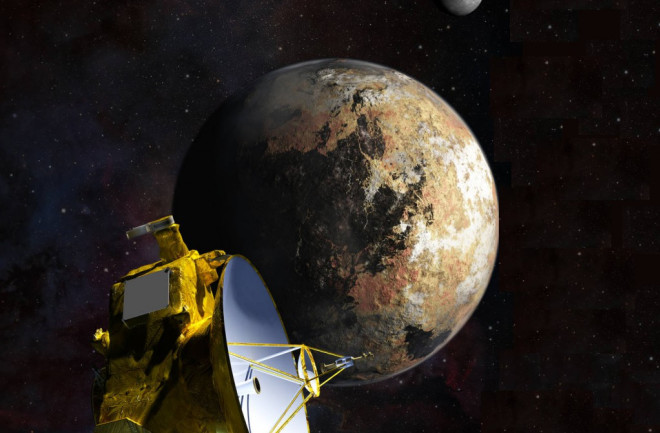 Artist’s illustration of the New Horizons spacecraft as it approaches Pluto and its largest moon, Charon. (Credit: NASA) The National Space Society has successfully turned New Horizons' approach of Pluto into this summer’s must-see blockbuster. The organization, in a video published this week, borrowed a page from Hollywood to get our hearts pumping and adrenaline flowing for the grand finale of mankind’s half-century journey through the solar system. On July 14, after logging more than 3-billion miles, the New Horizons spacecraft is going to reach the finish line: Pluto and its moons. The National Space Society’s video puts the whole journey into perspective, and will probably give you chills.

For the first time in history, we’re going to get an up-close view of a planetary body that even the Hubble Space Telescope struggles to see — it is 2.9 billion miles away, after all. However, come July 14, the New Horizons spacecraft will reach its target approach point just 7,750 miles from Pluto’s surface. Earlier this week, a 45-second thruster burst adjusted the spacecraft’s trajectory and set it on the optimal path to its target. It’ll be the first time anything launched from Earth will visit the dwarf planet. It will be the farthest world ever explored by mankind. As New Horizons executes its flyby, it will snap plenty of photos of Pluto and its system of moons to map their surfaces to get unprecedented insights into their surface composition and atmospheric patterns. New Horizons will also continue to take measurements of solar winds, high-energy particles and dust-particle concentrations to paint a clearer picture of the environment out there in deep space. Based on the latest check-up by NASA, New Horizons is healthy and all systems are operating normally — no reason to expect a Game of Thrones plot twist. So it looks like this epic tale should have a happy ending.