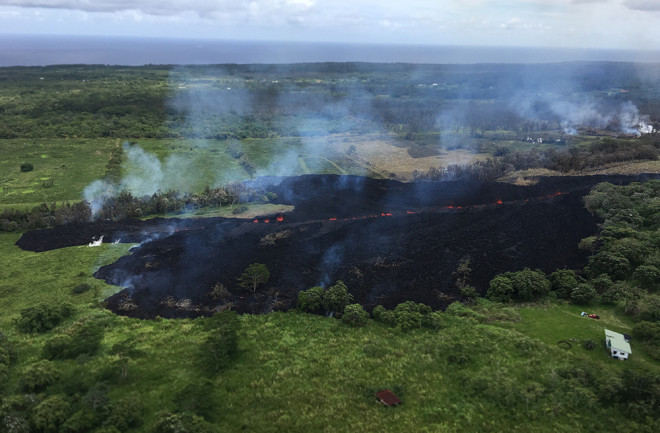 A'a lava flows from Fissure 17 on Kilauea, seen on May 13, 2018. USGS/HVO. After a brief respite, the fissure eruptions on the lower East Rift zone of Kilauea ramped back up again over the weekend, this time to the northeast of Leilani Estates. Fissure 17 (formerly fissure 18) has been erupting vigorously over the past day and has now produced lava fountains that have throw lava bombs hundreds of meters up -- watch the USGS video below for some stunning shots of lava blasting out of the vents! Lava flows (a'a) have also come from this new fissure (see images and videos, above and below) that are now 2 meters (~6 feet) thick in some places. This new fissure eruption has prompted more evacuations of local residents. Assessment of what kind of damage has occurred due to this eruption might take a while (see image below)

Aerial view of Fissure 17 taken on 13 May. You can see the central linear fissure and the lava flow that has formed. This continues to be a difficult & very uncertain time for the local communities. #Kilaueapic.twitter.com/Cwtomg9dqS

The summit area of Kilauea continues to deflate as well, suggesting that magma is still leaving the summit and traveling down the East Rift zone, potentially feeding these new eruptions. The Halema'uma'u crater is producing small explosive eruptions caused by debris falling into the lava lake far below and a white steam plume can be seen much of the time, betraying the fact that groundwater is likely entering the system as well (and I've talked about what that might mean

). Earthquakes at the summit have even been felt at the Hawaii Volcano Observatory.

The National Guard brought us into Leilani Estates for a look at the damage from the volcanic eruptions. They say there’s a house buried under this mountain of lava. I’ll have the latest on the #KilaueaEruption on your local @ABCRadio station. @ABC#Hawaii#volcanopic.twitter.com/hQcPy7tput

. One of the most fascinating observations from the Kapoho eruption is that the temperature of the lava increased as the eruption went on. That might seen counterintuitive, but it is something that Dr. Christina Neal, scientist-in-charge of the HVO, worries could happen during this eruption

as well. So, why would the temperature go up? One way to think of it is to remember that magma moves down the East Rift zone from the summit

. Now, eruptions have been happening about halfway down the East Rift zone for decades at Pu'u O'o, so likely it can be stored then. For whatever reason, that vent has stopped erupting in favor of the Leilani Estates fissures. One hypothesis is that the first lava to erupt are "older" lava that was already in the conduit system at Pu'u O'o and that eventually new magma coming from the source and summit will start erupting. Kind of like a bottle of mustard where you have to clear the blockage of old mustard out to get a good flow, these older magmas would need to be cleared out as well. Once that is done, hotter magma from the summit can flow more freely and erupt -- and magma like that can tend to produce more lava fountains and lava flows because being hotter, it is less sticky and likely full of more dissolved gases. My former postdoctoral advisor, Dr. Kari Cooper (at UC Davis), wrote a paper about lavas

erupted during the last fissure eruption under Leilani Estates in 1955. By dating crystals in the lava, she found that the magma erupted during the 1955 eruption may have been sitting in the East Rift for at least 550 years, cooling and crystallizing. Now, this value could be the result of a mix of younger crystals and much older crystals, but the take away is that some magma erupted at Leilani Estates in 1955 was older material. Where does that leave Kilauea now? If the older material has been/is being cleared out, then new magma from the summit that is hotter and runnier could be the next to erupt as the erupt continues to propagate to the northeast

. We might expect that the fissure eruptions will become more vigorous as this hotter magma erupts. The big question is how much new magma is being supplied. Like our mustard bottle, we can get the mustard flowing, but if the bottle is almost empty, then you still won't get much out of it. Eruptions on Kilauea similar to what we're seeing today have last weeks to months. Right now, the signs point to continued magma from the summit as the earthquakes continue, but it is still unclear just how long the eruption might continue.