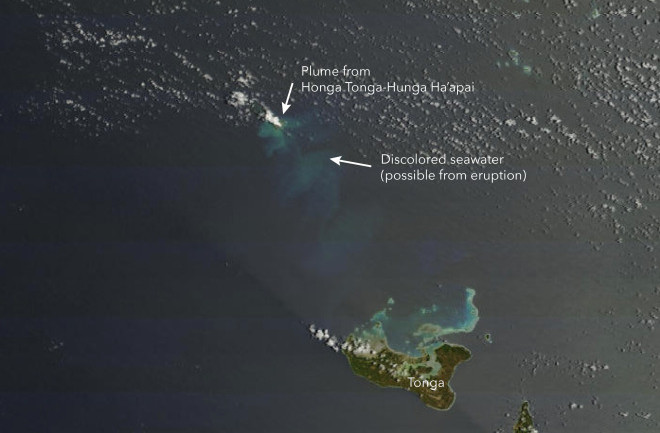 The eruption plume from Hunga Tonga-Hung Ha'apai seen on December 29, 2014 by Terra's MODIS Imager. Image from NASA, annotated by Erik Klemetti. A new eruption has started at the submarine volcano Hunga Tonga-Hunga Ha'apai in the island nation of Tonga. Local reports show a stark white plume rising from the sea where local fisherman first reported an eruption on December 19. Terra/MODIS image of the area (see below) taken on December 29 shows the plume and possible seawater discolored by the subsurface volcanic activity. Beyond this, not much is known about the actual activity at Hunga Tonga-Hung Ha'apai. The last eruption from this primarily submarine volcano was in 2009, when eruptions created impressive "rooster tail" explosions as erupting lava interacted with seawater at shallow water depths. An new island was born during that eruption, but such ocean islands rarely last if they are mainly made from explosive volcanic debris (tephra) that is easily washed away by wave action.