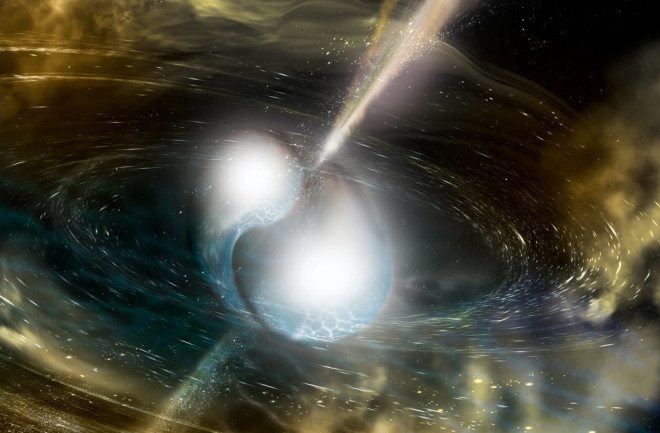 Colliding neutron stars might have seeded our solar system with valuable heavy elements. (Credit: NSF/LIGO/Sonoma State University/A. Simonnet) Before the planets in our solar system formed or the sun turned on and started shining, two other stars had to die. Their deaths and later collision would seed the area where our solar system formed with many of the heavy materials needed for life on Earth. Now, 4.6 billion years later, astronomers are piecing together the story of these long-dead stars. To do this, researchers studied different ways to make the heavy elements in question – exploding stars or violent collisions between stars – along with how often those phenomena occurred, and when the elements in our solar system were first produced. Researchers Imre Bartos and Szabolcs Márka published their results May 2 in the journal Nature.

Think back to high school, and at some point you probably had to study the periodic table, a long list of all the possible configurations of materials that make up the world around us. But while we talk a lot about carbon and nitrogen, silver and gold, or even lead and uranium, the truth is that the vast bulk of the universe is made up of just two elements: hydrogen and helium. Stars have to make all the other elements in the universe in their nuclear fusion-powered cores. And even they stop when they reach the element iron, only 26^th in order on the periodic table (elements are arranged from lightest, with the smallest number of protons, to heaviest, with the most). After that, everything we have comes from more exotic or extreme processes, like the explosion of a star at the end of its life – or the dramatic collision of one star with another. The former is much more common than the latter, at least when we’re talking about neutron stars, the dense cores of massive, dead stars. They make the most dramatic collisions, only slightly less energetic than two black holes colliding. Neutron star mergers occur only a few times per million years in our galaxy (though we sometimes track them from even further away via gravitational waves). By contrast, a new supernova explodes a few times per century somewhere in the Milky Way. Bartos and Márka looked at these rates, and compared them to the ages of materials they measured from our solar system. Specifically they looked at meteorites, which astronomers view as the building blocks of the solar system. These space rocks have spent the last few billion years floating through space. Materials on Earth, meanwhile, have been heavily processed, melted and re-formed, confusing the cosmic clock of where their elements originally formed. The meteorites therefore carry a history of how far back the elements that make up our solar system formed – and it turns out, it was something like 80 million years before our planet formed. The researchers then ran simulations of the Milky Way’s evolution, testing different histories of neutron star mergers and how they would affect the composition of our solar system today. They found that a single neutron star merger could have deposited a substantial amount of the heavy elements we have today by exploding less than 1,000 light-years away from the dust cloud that would one day become our solar system. It would have dumped something like a tenth of the moon’s mass worth of heavy material into the solar system. “If a comparable event happened today at a similar distance from the solar system, the ensuing radiation could outshine the entire night sky,” said Márka in a statement.