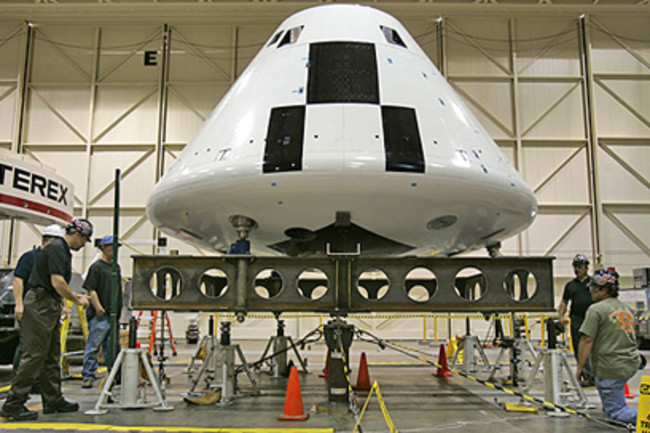 This week marks the anniversaries of both stunning success and nearly catastrophic failures in human spaceflight—it's been 49 years since Yuri Gugarin became the first man in space, and 40 years since the life-threatening drama on board Apollo 13. So perhaps it's fitting that this is the week the fight over the future of NASA comes to a head. Tomorrow, President Obama will defend his new plans for manned spaceflight, which he has changed somewhat after his proposal to cancel the Constellation program was met with a flood of criticism. When the President announced his budget in January, which came without funding for Constellation and its plans to go back to the moon and beyond, members of Congress had a fit (especially those who represent areas with jobs connected to Constellation). Former astronauts came out of the woodwork, too, and that list of critics now includes Neil Armstrong. The first moon-walker typically shies away from media controversies, but this week issued an open letter to the President. He writes:

“The availability of a commercial transport to orbit as envisioned in the President’s proposal cannot be predicted with any certainty, but is likely to take substantially longer and be more expensive than we would hope. It appears that we will have wasted our current $10-plus billion investment in Constellation" [The Times]

. Armstrong also writes that if the United States finds itself without spacecraft that can travel to the Earth's orbit and beyond, our nation will be destined "to become one of second or even third rate stature." In response to the criticisms, Obama plans to speak tomorrow on his plans for NASA at Kennedy Space Center in Florida, and it sounds like some compromises could be in the offing. Ahead of the President's speech, NASA Deputy Administrator Lori Garver spoke yesterday at the National Space Symposium and announced a restructured plan that potentially could save parts of Constellation, specifically the crew capsule called Orion. The new proposal calls for

a variant of the space capsule that could be launched unmanned to station within the next couple of years to serve as a crew lifeboat. Garver said the plan would allow the agency to retain some of its multibillion-dollar investment in the program while reducing U.S. reliance on Russian Soyuz spacecraft currently used as an emergency crew escape capability on the space station [Space News]

. And because Armstrong and many other said the President's plan would leave the United States stuck in low-Earth orbit,

White House officials said on Tuesday that Obama wants NASA to begin work on building a new heavy lift rocket sooner than envisioned under the canceled Constellation program, with a commitment to decide in 2015 on the specific rocket that will take astronauts deeper into space [Reuters]

. Future robotic missions, the White House says, will scout out potential targets for manned missions under the new plan.