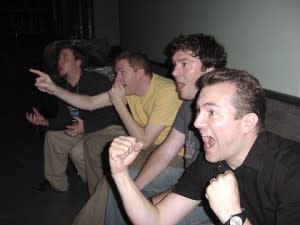 Testosterone changes during vicarious experiences of winning and losing among fans at sporting events.

"Basking in reflected glory, in which individuals increase their self-esteem by identifying with successful others, is usually regarded as a cognitive process that can affect behavior. It may also involve physiological processes, including changes in the production of endocrine hormones. The present research involved two studies of changes in testosterone levels among fans watching their favorite sports teams win or lose. In the first study, participants were eight male fans attending a basketball game between traditional college rivals. In the second study, participants were 21 male fans watching a televised World Cup soccer match between traditional international rivals. Participants provided saliva samples for testosterone assay before and after the contest. In both studies, mean testosterone level increased in the fans of winning teams and decreased in the fans of losing teams. These findings suggest that watching one's heroes win or lose has physiological consequences that extend beyond changes in mood and self-esteem."

Note from the ladies of NCBI ROFL: We will be on hiatus next week (July 5-9) because we are both traveling to conferences. If you're going to be at the SMBE meeting in Lyon or the FASEB Biology of Cilia and Flagella meeting in Vermont and want to hang out/buy us a beer/hear about the research we do when we're not blogging, drop us a line at ncbirofl[at]gmail.com!