NCBI ROFL: Why watching the Food Network could sabotage your diet. 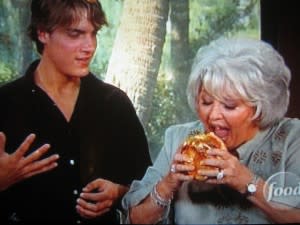 Watching food-related television increases caloric intake in restrained eaters. "While watching 30-min television (TV) programs that contained either food-related content or non-food-related content, participants were asked to eat two types of candy by explicitly being told that we were interested in how the TV program influenced their taste and therefore they needed to consume some of those candies. The results indicated that there was no overall difference in candy intake based on the TV content; however, the association was moderated by their restrained eating status. Restrained eaters ate more calories while watching a food-related TV program whereas unrestrained eaters were not influenced by the content of the TV program." Bonus excerpt from the materials and methods: "After all of the participants were seated, they were instructed that they were going to watch two TV program segments of SpongeBob SquarePants that would take approximately 30 min. We chose SpongeBob SquarePants because it is one of most popular animated television programs in the U.S. and we consequently assumed that most students would pay attention to the content of the shows. Importantly, those two segments contained either food-related content or non-food-related content depending on the condition. Specifically, food-related segments included the episodes of Chocolate with Nuts in which SpongeBob, a main character, sold chocolate bars and Jellyfish Hunter in which he collected jelly from jellyfish. Non-food-related segments included the episodes of Snowball Effects in which SpongeBob had a snowball fights with his friend and Squirrel Jokes in which he took the stage as a comedian. Participants were also instructed that they were free to eat the candy while watching as they were going to complete a questionnaire that assessed their evaluations toward the candy. The TV programs were shown on a 150-in. screen in the lecture hall using an overhead projector."