NCBI ROFL: Where do you score on the Facebook Addiction Scale? 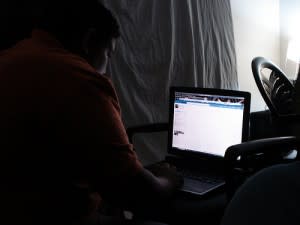 "The Bergen Facebook Addiction Scale (BFAS), initially a pool of 18 items, three reflecting each of the six core elements of addiction (salience, mood modification, tolerance, withdrawal, conflict, and relapse), was constructed and administered to 423 students together with several other standardized self-report scales (Addictive Tendencies Scale, Online Sociability Scale, Facebook Attitude Scale, NEO-FFI, BIS/BAS scales, and Sleep questions). That item within each of the six addiction elements with the highest corrected item-total correlation was retained in the final scale. The factor structure of the scale was good (RMSEA = .046, CFI = .99) and coefficient alpha was .83. The 3-week test-retest reliability coefficient was .82. The scores converged with scores for other scales of Facebook activity. Also, they were positively related to Neuroticism and Extraversion, and negatively related to Conscientiousness. High scores on the new scale were associated with delayed bedtimes and rising times." Bonus: questions from the Facebook Addiction Scale: All items are scored on the following scale: 1: Very rarely, 2: Rarely, 3: Sometimes, 4: Often, 5: Very often. How often during the last year have you . . . Spent a lot of time thinking about Facebook or planned use of Facebook? Thought about how you could free more time to spend on Facebook? Thought a lot about what has happened on Facebook recently? Spent more time on Facebook than initially intended? Felt an urge to use Facebook more and more? Felt that you had to use Facebook more and more in order to get the same pleasure from it? Used Facebook in order to forget about personal problems? Used Facebook to reduce feelings of guilt, anxiety, helplessness, and depression? Used Facebook in order to reduce restlessness? Experienced that others have told you to reduce your use of Facebook but not listened to them? Tried to cut down on the use of Facebook without success? Decided to use Facebook less frequently, but not managed to do so? Become restless or troubled if you have been prohibited from using Facebook? Become irritable if you have been prohibited from using Facebook? Felt bad if you, for different reasons, could not log on to Facebook for some time? Used Facebook so much that it has had a negative impact on your job/studies? Given less priority to hobbies, leisure activities, and exercise because of Facebook? Ignored your partner, family members, or friends because of Facebook? "The authors suggest that the BFAS can be used in epidemiological as well as clinical settings. The present study did not examine specific cutoff scores for a categorization of problems with Facebook addiction. Howev- er, in line with studies assessing other behavioral addictions (Lemmens, et al., 2009), a liberal approach would entail the use of a polythetic scoring scheme (e.g., scoring 3 or above on at least four of the six items), whereas a more conservative approach could be to use a monothetic scoring key (e.g., scoring 3 or above on all six items). The usefulness of the proposed cutoff value for categorization of Facebook addiction should be pursued in future studies." 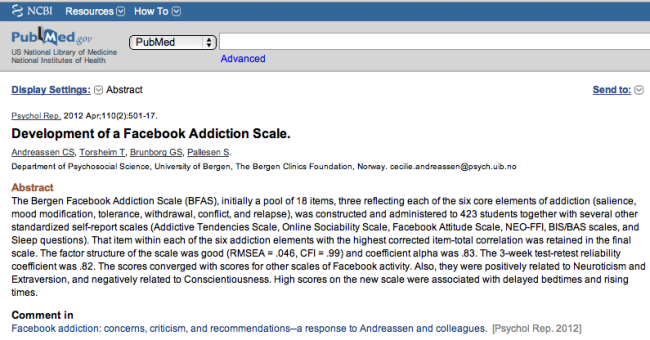