NCBI ROFL: What your Facebook "Likes" say about you. 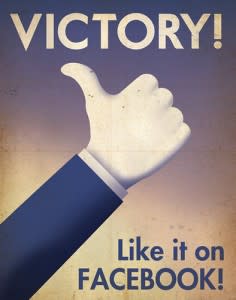 For our next installment of Facebook-related research, we present a study of "Likes", in which the researchers investigated what that thumbs-up button can predict about a person. It turns out that a lot can be predicted from our Likes, from intelligence (which, for some reason, is correlated with Liking thunderstorms and curly fries) to sexuality (homosexuals Like "Wicked the musical"). Just something to think about before you Like the group "Walking With Your Friend & Randomly Pushing Them Into Someone/Something"--which, according to Table S1, is associated with having few friends.

Private traits and attributes are predictable from digital records of human behavior "We show that easily accessible digital records of behavior, Facebook Likes, can be used to automatically and accurately predict a range of highly sensitive personal attributes including: sexual orientation, ethnicity, religious and political views, personality traits, intelligence, happiness, use of addictive substances, parental separation, age, and gender. The analysis presented is based on a dataset of over 58,000 volunteers who provided their Facebook Likes, detailed demographic profiles, and the results of several psychometric tests. The proposed model uses dimensionality reduction for preprocessing the Likes data, which are then entered into logistic/linear regression to predict individual psychodemographic profiles from Likes. The model correctly discriminates between homosexual and heterosexual men in 88% of cases, African Americans and Caucasian Americans in 95% of cases, and between Democrat and Republican in 85% of cases. For the personality trait “Openness,” prediction accuracy is close to the test–retest accuracy of a standard personality test. We give examples of associations between attributes and Likes and discuss implications for online personalization and privacy." Bonus excerpt from the full text: "Individual traits and attributes can be predicted to a high degree of accuracy based on records of users’ Likes. Table S1 presents a sample of highly predictive Likes related to each of the attributes. For example, the best predictors of high intelligence include “Thunderstorms,” “The Colbert Report,” “Science,” and “Curly Fries,” whereas low intelligence was indicated by “Sephora,” “I Love Being A Mom,” “Harley Davidson,” and “Lady Antebellum.” Good predictors of male homosexuality included “No H8 Campaign,” “Mac Cosmetics,” and “Wicked The Musical,” whereas strong predictors of male heterosexuality included “Wu-Tang Clan,” “Shaq,” and “Being Confused After Waking Up From Naps.” Although some of the Likes clearly relate to their predicted attribute, as in the case of No H8 Campaign and homosexuality, other pairs are more elusive; there is no obvious connection between Curly Fries and high intelligence." 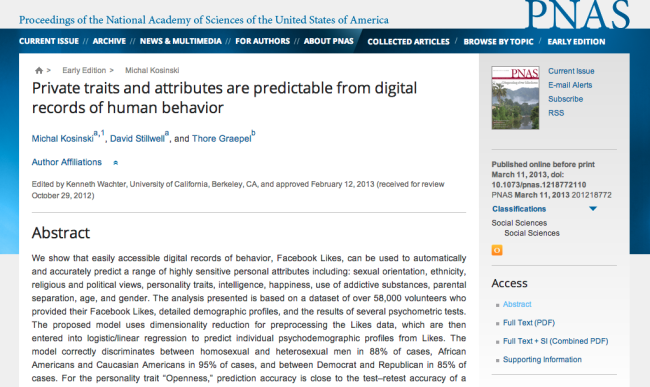