NCBI ROFL: Weak with sex: sexual intercourse as a trigger for cataplexy.

"INTRODUCTION: Sudden, often positive emotions are typical triggers for cataplexy in patients with narcolepsy-cataplexy (NC). Cataplexy during sexual intercourse and orgasm (orgasmolepsy) has been previously reported, but its frequency and characteristics are poorly known. AIM: To assess frequency and features of loss of muscle tone during sexual intercourse in a series of patients with NC, other sleep-wake disorders, and healthy controls... ...RESULTS: Orgasmolepsy was reported by three NC patients (two female, one male), one male patient with behaviorally induced insufficient sleep syndrome (BIISS) and cataplexy-like symptoms, and none of the healthy controls. In the two female NC patients, orgasmolepsy occurred by each sexual intercourse, and the male patient reported orgasmolepsy only when in a relationship involving emotional commitment and trust. In the patient with BIISS and orgasmolepsy, cataplexy-like symptoms involved unilaterally upper or lower limbs in association with negative emotions or sports activities." 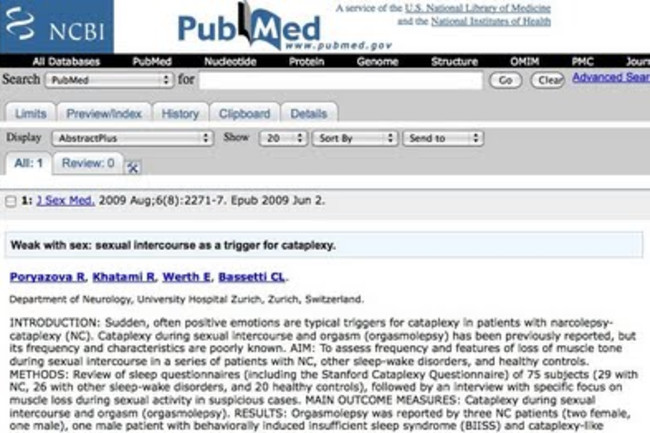 Thanks to Amos for today's ROFL!