NCBI ROFL: This study should be taken with a grain of salt. 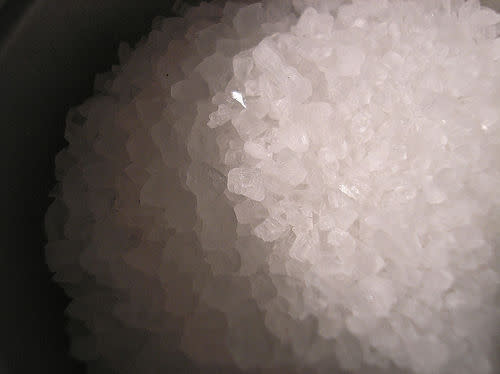 As everyone knows, "practice makes perfect". But how much better do you get with practice? Do you become more accurate, or just more precise (more consistent, despite whether you are correct)? Apparently, this hasn't been tested, and these researchers earned their salt by investigating if trained subjects are more accurate or more precise at estimating how much sodium chloride (table salt) is in a sample of salt water spiked with sucrose (sugar). Should we a-salt you with another salty joke? Na, that just wouldn't be kosher. Iodized.Superiority of experts over novices in trueness and precision of concentration estimation of sodium chloride solutions. "Several studies have reported that experts outperform novices in specific domains. However, the superiority of experts in accuracy, taking both trueness and precision into consideration, has not yet been explored. Here, we examined differences between expert and novice performances by evaluating the accuracy of their estimations of physical concentrations of sodium chloride in solutions while employing a visual analog scale. In Experiment 1, 14 experts and 13 novices tasted 6 concentrations of the solutions until they had learned their intensities. Subsequently, they repeatedly rated the concentration of 3 other solutions in random order. Although we did not find a difference between the performances of the 2 groups in trueness (difference between rating and correct concentration), the precision (consistency of ratings for each participant) of experts was higher than that of novices. In Experiment 2, 13 experts who had participated in Experiment 1 and 10 experts and 12 novices who had not participated in Experiment 1 rated the salt concentration in sodium chloride/sucrose mixtures in the same way as in Experiment 1. Both trueness and precision of performance were higher in both expert groups than in the novice group. By introducing precision and trueness parameters, we succeeded in quantifying the estimations of experts and novices in rating the concentration of solutions, revealing experts' superiority even for a task they had not been trained for." 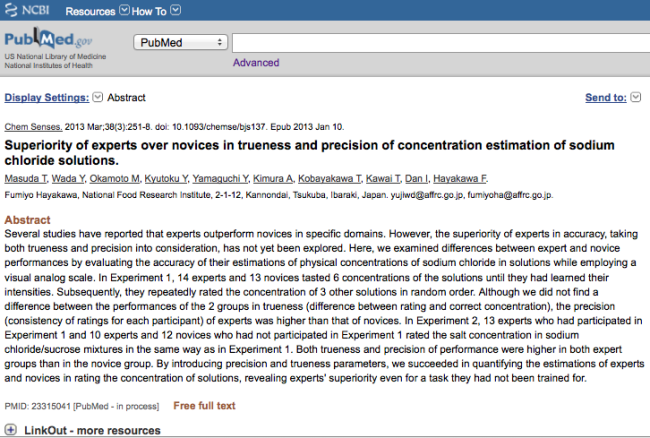 Related content: Discoblog: NCBI ROFL: Smelly Week: How to train your mouse to be a wine snob.

Discoblog: NCBI ROFL: Experimental setup: listen to laughter while a scientist burns your hands with a laser.