NCBI ROFL: The vomiting of the shrew.

Effect of daily linear acceleration training on the hypergravity-induced vomiting response in house musk shrew (Suncus murinus). "The effects of repeated linear acceleration training and the antimotion sickness drug, promethazine, on hypergravity-induced motion sickness were examined in musk shrew (Suncus murinus), which is known to show a vomiting response to motion stimulation. Animals were assigned into five groups: vestibular intact, untreated animals (Sham), vestibular lesioned (VL) animals, vestibular intact animals with promethazine hydrochloride administered as daily drinking water (Prom), vestibular intact animals who underwent horizontal linear accelerator motion training (Train), and vestibular intact animals treated with both promethazine hydrochloride and linear acceleration training (Prom+Train). In Sham animals, the number of vomiting episodes was 14±2 during 2 G exposure for 10min, and was accompanied by intense Fos expression in the medial vestibular nucleus (MVe), the nucleus of the solitary tract (NTS), the area postrema (AP), and the paraventricular hypothalamic nucleus (PVN). The vomiting response and Fos expression were completely abolished in VL animals, indicating that these responses are mediated via the vestibular system. Although Train and Prom animals experienced a significantly reduced number of hypergravity-induced vomiting episodes compared with Sham animals, the effect was significantly greater in Train animals than in Prom animals. Fos expression in the NTS, AP, and PVN were significantly more reduced in Train animals than in Prom animals. Higher dose of bolus injection of promethazine (50mg/kg, i.p.) completely abolished the vomiting episodes, although the animals were drowsy and sedated due to side effects. In conclusion, daily linear acceleration training and promethazine could prevent the hypergravity-induced vomiting episodes." 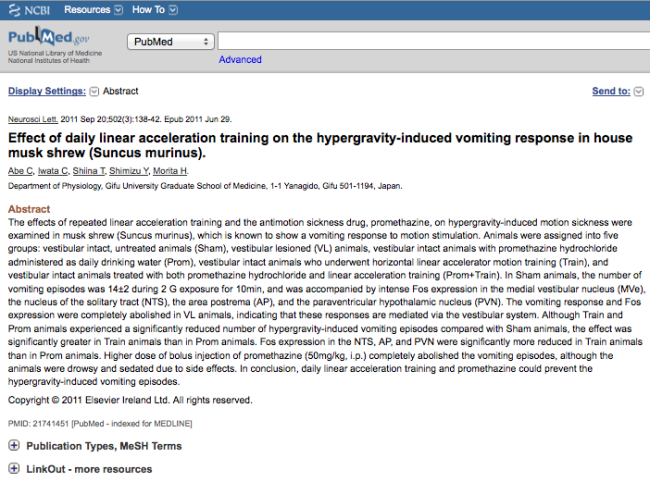