NCBI ROFL: The strange case of the "vampire" burial in Venice.

"During the years 2006–2007, the Archeological Superintendent of Veneto (Italy) promoted a research project on mass graves located on Nuovo Lazzaretto in Venice, where the corpses of plague deaths were buried during the 16th and 17th centuries. The burials were of different stages and are believed to be the remains of plague victims from the numerous outbreaks of pestilence, which occurred between the 15th and 17th centuries. Among the fragmented and commingled human bones, an unusual burial was found. The body was laid supine, with the top half of the thorax intact, arms parallel to the rachis axis, the articulations were anatomically unaltered. Both the skull morphology and the dimensions of the caput omeris suggest the body was a woman. A brick of moderate size was found inside the oral cavity, keeping the mandible wide open. The data collected by the anthropologist were used to generate a taphonomic profile, which precluded the positioning of the brick being accidental. Likewise, the probability of the brick having come from the surrounding burial sediment was rejected, as the only other inclusions found were bone fragments from previous burials in the same area. The data collected by the odontologist were employed for age estimation and radiological dental assessment. The forensic profile was based conceptually on the “circumstances of death” and concluded that the positioning of the brick was intentional, and attributed to a symbolic burial ritual.This ritual confirms the intimate belief held at those times, between the plague and the mythological character of the vampire." Bonus excerpt from the full text: "We assume that during the digging of a hole in the ground for a person who had just died of the plague, the gravediggers cut off the ID 6 deposition. They noticed the shroud (its presence is suggested by the verticalization of the clavicle) and a hole, which corresponded with the mouth. As the body appeared as quite intact, they probably recognized in that body the so-called vampire, responsible for plague by chewing her shroud. As a consequence, they inserted a brick in her mouth. The sequence of those events (time since death) can be deduced by the lack of alteration on the skeleton joints, so that we can suppose that the gravediggers dealt with the corpse when it was not disjointed yet. The insertion of the brick into the mouth at the time of the primary deposition can be ruled out because we have no reference, even folkloric, for such a practice in that historical and cultural context. It is not strange that superstitions concerning vampires were widespread in the 16th to 17th centuries even in a “cosmopolitan” and evolved city like Venice. It is surprising, however, that this exorcism ritual has been clearly recognized in an archaeological context: the ID 6 grave could well be the first “vampire” burial archaeologically attested and studied by a forensic odontological and anthropological approach."

Forensic approach to an archaeological casework of "vampire" skeletal remains in Venice: odontological and anthropological prospectus. 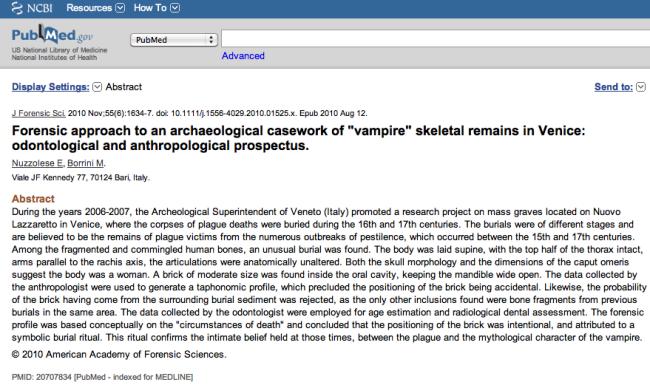