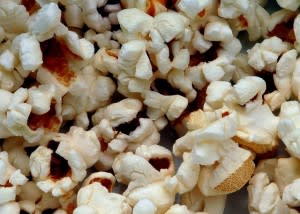 Bronchiolitis obliterans and consumer exposure to butter-flavored microwave popcorn: a case series. "Respiratory exposure to diacetyl and diacetyl-containing flavorings used in butter-flavored microwave popcorn (BFMP) causes lung disease, including bronchiolitis obliterans (BO), in flavorings and popcorn manufacturing workers. However, there are no published reports of lung disease among BFMP consumers. We present a case series of three BFMP consumers with biopsy-confirmed BO. We review data relating to consumer exposures, estimate case exposures, and compare them to diacetyl-containing flavoring-exposed manufacturing workers with lung disease. These consumer cases' exposure levels are comparable to those that caused disease in workers. We were unable to identify any other exposures or diseases known or suspected to cause BO in these cases. BFMP poses a significant respiratory risk to consumers. Some manufacturers have substituted diacetyl with other alpha-diketones that are likely to pose a similar risk. Simple consumer practices such as cooling the popcorn bag would eliminate the risk of severe lung disease." 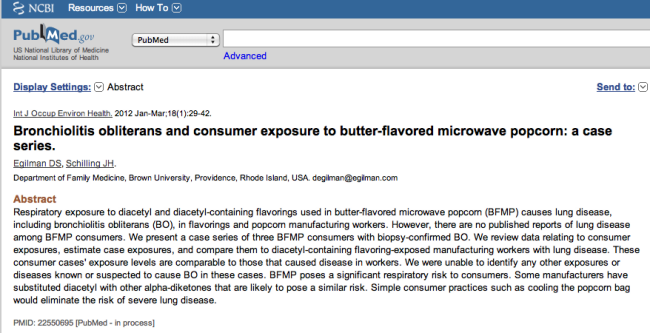 Related content: Discoblog: NCBI ROFL: Before you trust the five-second rule, read this.

Discoblog: NCBI ROFL: Since when is barnyard flavor a bad thing?