"Background The increasing popularity of commercial movies showing three dimensional (3D) images has raised concern about possible adverse side effects on viewers. Methods and Findings A prospective carryover observational study was designed to assess the effect of exposure (3D vs. 2D movie views) on self reported symptoms of visually induced motion sickness. The standardized Simulator Sickness Questionnaire (SSQ) was self administered on a convenience sample of 497 healthy adult volunteers before and after the vision of 2D and 3D movies. Viewers reporting some sickness (SSQ total score>15) were 54.8% of the total sample after the 3D movie compared to 14.1% of total sample after the 2D movie. Symptom intensity was 8.8 times higher than baseline after exposure to 3D movie (compared to the increase of 2 times the baseline after the 2D movie). Multivariate modeling of visually induced motion sickness as response variables pointed out the significant effects of exposure to 3D movie, history of car sickness and headache, after adjusting for gender, age, self reported anxiety level, attention to the movie and show time. Conclusions Seeing 3D movies can increase rating of symptoms of nausea, oculomotor and disorientation, especially in women with susceptible visual-vestibular system. Confirmatory studies which include examination of clinical signs on viewers are needed to pursue a conclusive evidence on the 3D vision effects on spectators." 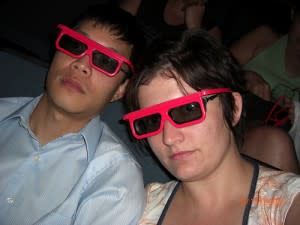 Are There Side Effects to Watching 3D Movies? A Prospective Crossover Observational Study on Visually Induced Motion Sickness 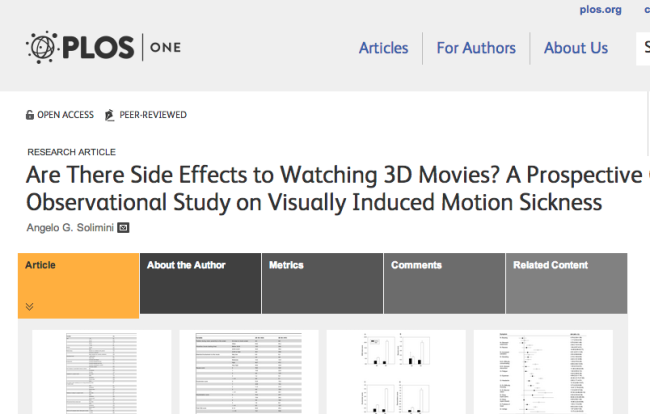 Discoblog: NCBI ROFL: Your rug is so ugly it makes me sick. Literally.