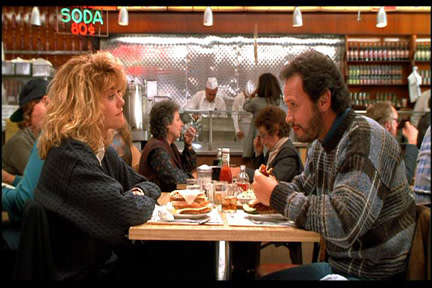 Immediate effects of chocolate on experimentally induced mood states. "In this work two hypotheses were tested: (1) that eating a piece of chocolate immediately affects negative, but not positive or neutral mood, and (2) that this effect is due to palatability. Experiment 1 (48 normal-weight and healthy women and men) examined the effects of eating a piece of chocolate and drinking water on negative, positive and neutral mood states induced by film clips. Eating chocolate reduced negative mood compared to drinking water, whereas no or only marginal effects were found on neutral and positive moods. Experiment 2 (113 normal-weight and healthy women and men) compared effects of eating palatable and unpalatable chocolate on negative mood, and examined the duration of chocolate-induced mood change. Negative mood was improved after eating palatable chocolate as compared to unpalatable chocolate or nothing. This effect was short lived, i.e., it disappeared after 3 min. In both experiments, chocolate-induced mood improvement was associated with emotional eating. The present studies demonstrate that eating a small amount of sweet food improves an experimentally induced negative mood state immediately and selectively and that this effect of chocolate is due to palatability. It is hypothesized that immediate mood effects of palatable food contribute to the habit of eating to cope with stress." Bonus quotes from the Materials and Methods: "To induce mood states, excerpts from popular movies were shown: a sad sequence from “The Champ” in which a boy cries at the death of his father (2:51 min) and a happy sequence from “When Harry Met Sally” in which a woman and a man discuss an orgasm (2:35 min). An emotionally neutral film sequence was used as a control stimulus (a documentary on the processing and usage of copper; 2:02 min)." "One group of participants (n=24) received a piece of chocolate (5 g), the other group (n=24) a sample of spring water (20 ml, three pieces or three samples in all). They received the chocolate they had chosen before the experiment as most pleasant out of seven types of commercially available chocolates from the same brand (“Ritter Sport”, Alfred Ritter GmbH). Eight participants had preferred milk chocolate, six participants chocolate with hazelnuts, five participants chocolate with cornflakes, three participants milk chocolate with cocoa cream paste, and two participants plain chocolate." 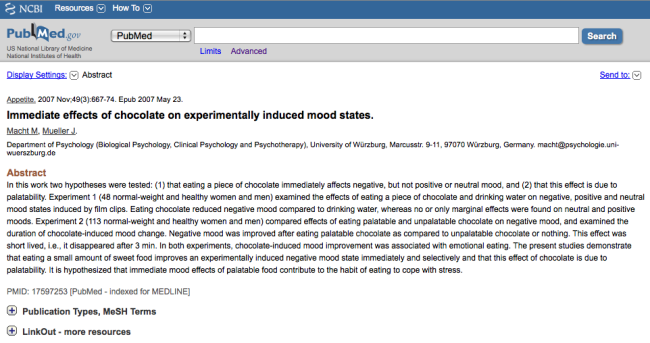