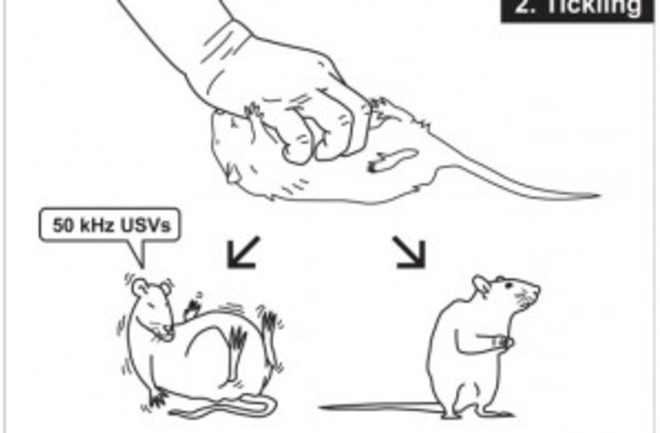 Speaking of animal emotions, these researchers set out to test whether lab rats can be optimistic (despite their seemingly depressing circumstances). To make the rats happy, they tickled them, causing them to emit "rat laughter." They then tested whether these pre-trained rats would interpret an ambiguous noise as signaling a reward or punishment. The result? The tickled rats were more optimistic about the meaning of the noise, suggesting that rats--and therefore mammals in general--can make judgements that are affected by their emotional states.Maybe there's a lesson in this for grad students?

"Emotions can bias human decisions- for example depressed or anxious people tend to make pessimistic judgements while those in positive affective states are often more optimistic. Several studies have reported that affect contingent judgement biases can also be produced in animals. The animals, however, cannot self-report; therefore, the valence of their emotions, to date, could only be assumed. Here we present the results of an experiment where the affect-contingent judgement bias has been produced by objectively measured positive emotions. We trained rats in operant Skinner boxes to press one lever in response to one tone to receive a food reward and to press another lever in response to a different tone to avoid punishment by electric foot shock. After attaining a stable level of discrimination performance, the animals were subjected to either handling or playful, experimenter-administered manual stimulation - tickling. This procedure has been confirmed to induce a positive affective state in rats, and the 50-kHz ultrasonic vocalisations (rat laughter) emitted by animals in response to tickling have been postulated to index positive emotions akin to human joy. During the tickling and handling sessions, the numbers of emitted high-frequency 50-kHz calls were scored. Immediately after tickling or handling, the animals were tested for their responses to a tone of intermediate frequency, and the pattern of their responses to this ambiguous cue was taken as an indicator of the animals' optimism. Our findings indicate that tickling induced positive emotions which are directly indexed in rats by laughter, can make animals more optimistic. We demonstrate for the first time a link between the directly measured positive affective state and decision making under uncertainty in an animal model. We also introduce innovative tandem-approach for studying emotional-cognitive interplay in animals, which may be of great value for understanding the emotional-cognitive changes associated with mood disorders."

Discoblog: NCBI ROFL: Why can't you tickle yourself?