NCBI ROFL: I swear I haven't been drinking, Officer. It was my gut flora!

"For various reasons, the reliability of the results of forensic alcohol analysis are often challenged by the defence. One such argument for acquittal concerns the notion that alcohol could be produced naturally in the body, hence the term 'auto-brewery' syndrome. Although yeasts such as Candida albicans readily produce ethanol in-vitro, whether this happens to any measurable extent in healthy ambulatory subjects is an open question. Over the years, many determinations of endogenous ethanol have been made, and in a few rare instances (Japanese subjects with very serious yeast infections) an abnormally high ethanol concentration (> 80 mg/dl) has been reported... ...With reliable gas chromatographic methods of analysis, the concentrations of endogenous ethanol in peripheral venous blood of healthy individuals, as well as those suffering from various metabolic disorders (diabetes, hepatitis, cirrhosis) ranged from 0-0.08 mg/dl. These concentrations are far too low to have any forensic or medical significance. The notion that a motorist's state of intoxication was caused by endogenously produced ethanol lacks merit." 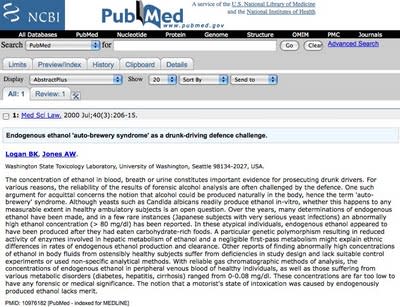