NCBI ROFL: He gave me the hairy eyeball...literally. 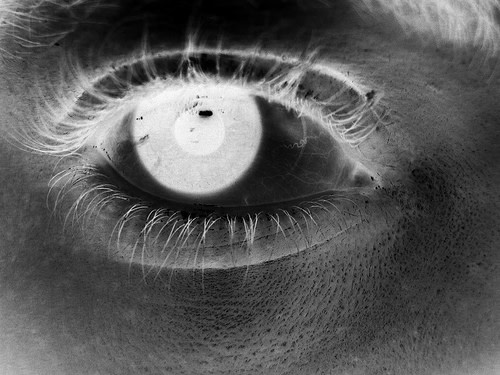 You might think of tumors as amorphous balls of cells growing out of control. But did you know that they can have differentiated tissues inside of them? Some tumors grow sweat glands, hair, and even teeth. Ugh. This is a case report of a man who grew such a tumor in his eye, and the pun was not lost on his doctor. WARNING: graphic figure after the jump.

Images in clinical medicine. The hairy eyeball--limbal dermoid. "A 19-year-old man presented to our ophthalmology clinic with a mass in his right eye that had been present since birth but had gradually increased in size. He did not have pain, but the mass caused vision defects, mild discomfort on blinking, and the intermittent sensation of the presence of a foreign body. Physical examination revealed a white, ovoid mass, 5 mm by 6 mm, that straddled the inferotemporal limbus (Panel A), with several black hairs (Panel B). Visual acuity was 20/20 in the left eye and 20/60 in the right eye. Intraocular pressure was normal. The differential diagnoses included limbal dermoid, foreign-body granuloma, atypical pterygium, and corneal scar. The appearance of the mass, with hairs present, was indicative of limbal dermoid. The lesion was excised, and lamellar keratoplasty was performed for cosmetic reasons. Pathological findings confirmed the diagnosis of limbal dermoid. As expected, there was little improvement in visual acuity after surgery because of the amblyopia and induced astigmatism." 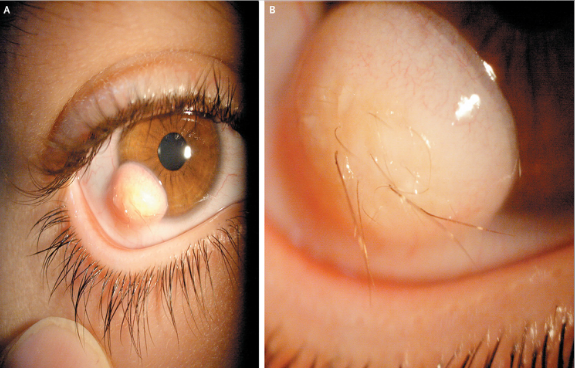 Related content: Discoblog: NCBI ROFL: Stinging in the oral cavity caused by ingestion of the sperm bags of a squid: a case report.

Discoblog: NCBI ROFL: Bat attack!: an unusual cause of keratouveitis.

Discoblog: NCBI ROFL: Is that a subcutaneous larva or a hair?

Planet EarthCan Animals Be Right- or Left-Pawed?
Recommendations From Our Store