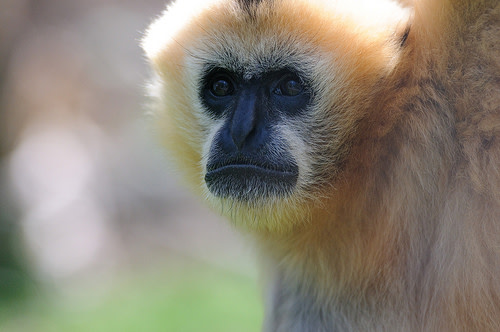 Soprano singing in gibbons. "Diversifications in primate vocalization, including human speech, are believed to reflect evolutionary modifications in vocal anatomy and physiology. Gibbon song is acoustically unique, comprising loud, melodious, penetrating pure tone-like calls. In a white-handed gibbon, Hylobates lar, the fundamental frequency (f(0) ) of song sounds is amplified distinctively from the higher harmonics in normal air. In a helium-enriched atmosphere, f(0) does not shift, but it is significantly suppressed and 2f(0) is emphasized. This implies that the source is independent of the resonance filter of the supralaryngeal vocal tract (SVT) in gibbons, in contrast to musical wind instruments, in which the filter primarily determines f(0) . Acoustic simulation further supported that gibbons' singing is produced analogously to professional human soprano singing, in which a precise tuning of the first formant (F(1) ) of the SVT to f(0) amplifies exclusively the f(0) component of the source. Thus, in gibbons, as in humans, dynamic control over the vocal tract configuration, rather than anatomical modifications, has been a dominant factor in determining call structure. The varied dynamic movements were adopted in response to unique social and ecological pressures in gibbons, allowing monogamous gibbons to produce pure-tonal melodious songs in the dense tropical forests with poor visibility." 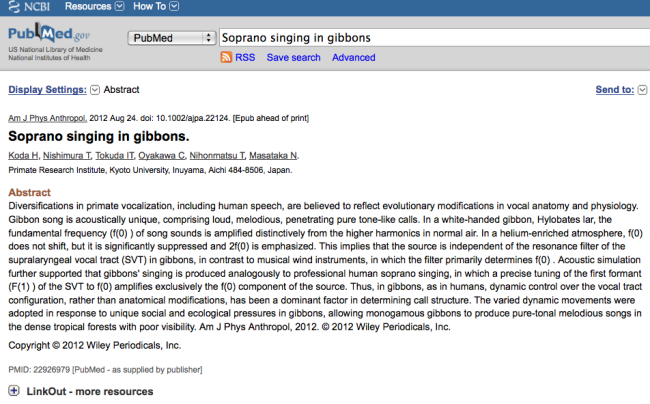 Photo: flickr/Eric Kilby Thanks to Erin W. for today's ROFL!