NCBI ROFL: A Jungle in There: Bacteria in Belly Buttons are Highly Diverse, but Predictable.

"The belly button is one of the habitats closest to us, and yet it remains relatively unexplored. We analyzed bacteria and arachaea from the belly buttons of humans from two different populations sampled within a nation-wide citizen science project. We examined bacterial and archaeal phylotypes present and their diversity using multiplex pyrosequencing of 16S rDNA libraries. We then tested the oligarchy hypothesis borrowed from tropical macroecology, namely that the frequency of phylotypes in one sample of humans predicts its frequency in another independent sample. We also tested the predictions that frequent phylotypes (the oligarchs) tend to be common when present, and tend to be more phylogenetically clustered than rare phylotypes. Once rarefied to four hundred reads per sample, bacterial communities from belly buttons proved to be at least as diverse as communities known from other skin studies (on average 67 bacterial phylotypes per belly button). However, the belly button communities were strongly dominated by a few taxa: only 6 phylotypes occurred on >80% humans. While these frequent bacterial phylotypes (the archaea were all rare) are a tiny part of the total diversity of bacteria in human navels (0.3% of phylotypes), they constitute a major portion of individual reads (~1/3), and are predictable among independent samples of humans, in terms of both the occurrence and evolutionary relatedness (more closely related than randomly drawn equal sets of phylotypes). Thus, the hypothesis that “oligarchs” dominate diverse assemblages appears to be supported by human-associated bacteria. Although it remains difficult to predict which species of bacteria might be found on a particular human, predicting which species are most frequent (or rare) seems more straightforward, at least for those species living in belly buttons." 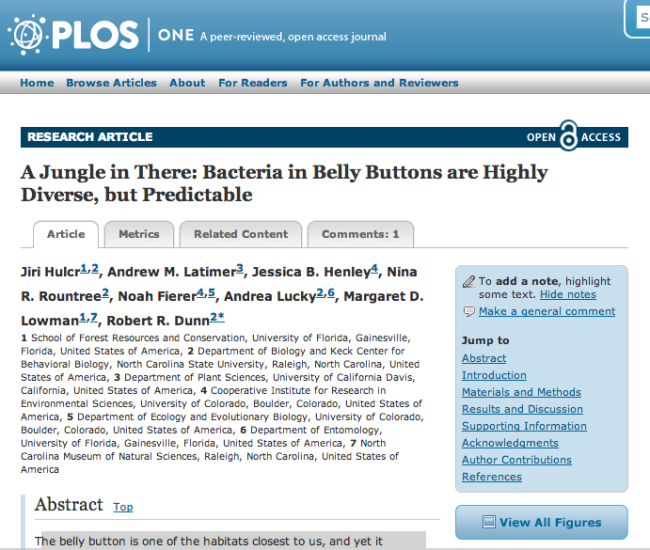 Related content: Discoblog: NCBI ROFL: On the purpose of the belly button.