NCBI ROFL: A field study of bar-sponsored drink specials and their associations with patron intoxication. 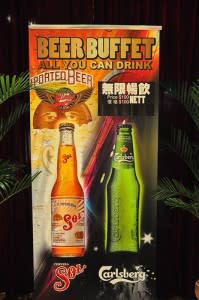 "OBJECTIVE: The study examined associations between bar-sponsored drink specials and alcohol intoxication at the patron level. METHOD: Data were collected in a college bar district located in a large campus community in the southeastern United States. Random and self-selected samples of patrons were interviewed after exiting college bars at night on four different nights (N=383). Anonymous interview and questionnaire data were collected as well as breath alcohol concentration (BrAC) readings. RESULTS: Significant gender differences existed in patron drinking practices. Women were more likely to take advantage of drink specials, whereas men reported greater alcohol expenditures, consumed more drinks, and drank for longer periods of time. Gender differences in BrAC were very small and not meaningful. Patrons who did not take advantage of drink specials reported consuming more drinks before bar entry than patrons who did participate in these promotions. Participation in "all-you-can-drink" promotions was significantly associated with higher BrAC readings after adjusting for covariates and random effects attributable to drinking establishment. Other drink specials did not have significant associations with alcohol intoxication. CONCLUSIONS: The all-you-can-drink special may be the specific discounting practice with the greatest potential for boosting patron intoxication and thus may need to be a stronger focus of alcohol-control policies aimed at improving the beverage service of drinking establishments." 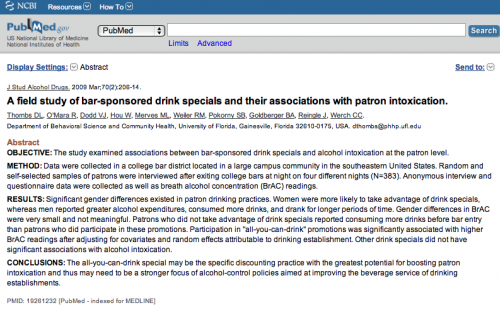