NASA’s Next Stop: A Space Station Orbiting The Moon 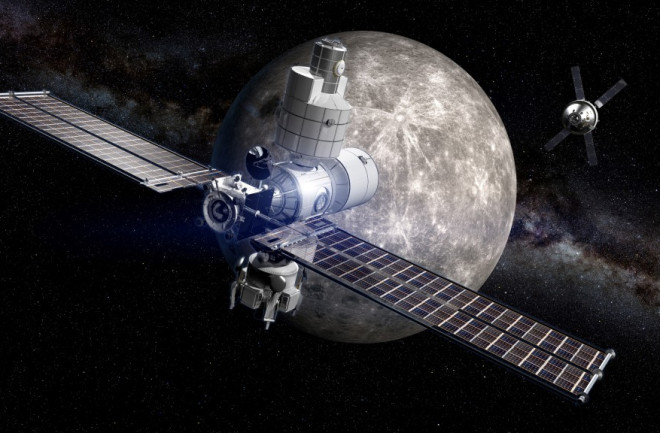 The International Space Station is entering its twilight years. As such, NASA is making plans for the space station of the future — one that would orbit the moon.

This new lunar outpost will be smaller and more remote than the ISS — orbiting beyond Earth’s protective magnetic field. And the station’s goal would be to serve as a transit hub for deep space missions and exploration past low-Earth orbit, while continuing all the science that can be done in zero gravity. It would also be within easy reach of the lunar surface.

NASA recently hosted a workshop in Denver to brainstorm projects and ideas for this future station, called the Lunar Orbital Platform-Gateway. Mostly, NASA wanted to know what research and missions the space community wants to pursue, and what this potential Gateway station would need in order to accommodate them—you know, power, space, and communications abilities. The list of participants included not just lunar scientists, but researchers in heliophysics and astrophysics, as well as Earth and life science.

At the workshop, some scientists emphasized the importance of sampling missions that could collect rocks from the lunar surface as well as asteroids. They’d also like to use Gateway to study particles from the wilds of the solar system beyond Earth’s Van Allen radiation belts, which divert most high-energy particles away from low-Earth orbiting satellites, including the ISS.

Having infrastructure to collect, store, and perhaps analyze these samples will be an important feature of the new station. “If you only have to get to Gateway, that’s a lot easier than returning samples all the way to Earth,” says Ben Bussey, chief exploration scientist of the Advanced Exploration Systems Division at NASA, and one of the organizers of the Gateway conference.

The community of researchers using CubeSats — tiny satellites smaller than a loaf of bread — also sees value in using the station. CubeSats are often launched from the ISS and are currently limited to low-Earth orbit, but NASA’s already making plans to launch a select group of tiny spacecraft on future lunar missions. And Gateway could serve as a vital communications relay, helping ease the back-and-forth of information from far-off projects.

And Gateway could even prove to be important for delivering or servicing remote observatories like the yet-to-be-launched James Webb Space Telescope. The Space Shuttle provided services for its predecessor, Hubble, but Webb will orbit much farther out.

That’s one of the reasons Gateway will also almost certainly sport a robotic arm to help maneuver instruments and items outside the station, similar to the one currently on ISS.

The first-round of construction for the Gateway project is tied to the first launches of NASA’s new Orion crew capsule on top of the long-awaited Space Launch System rocket, or SLS, which will push cargo and crew beyond low-Earth orbit and toward the moon and beyond.

The first module to lift off would be a power and propulsion system, targeted for 2022. A pressurized habitation section would follow in 2023, at which point astronauts could visit, traveling there and back in Orion, with stays up to a month or two.

The new station won’t require continuous human occupancy, unlike the ISS, whose long-duration missions have supported individual astronauts for over a year in space, and which hasn’t been empty of human visitors since 2000. Gateway’s minimum crew is set to four, which is the capacity of Orion. So, no space traveler has to draw the short straw and stay in a cramped capsule while her friends float in the relative luxury of a space station.

Eventually, NASA wants to give Gateway an airlock and an additional logistics module, which could handle anything from cargo resupply to scientific research. It would be general-use space for anything that requires a pressurized environment.

And while NASA is spearheading the charge, Gateway could end up as multinational as the ISS. The Russian, European, Canadian, and Japanese space agencies are all partners of interest. Though no one, including NASA, is 100 percent committed to building this station at the moment.

Yet with newfound focus on a return to the moon, the proximity could ease the way for future crewed explorations on the surface. And Gateway’s distance from Earth, and the full-disk view of our home planet that goes with it, will allow Earth scientists a view they rarely get of our home planet: that of an outsider. This perspective is hugely valuable to the teams currently trying to understand what a habitable exoplanet might look like from afar. Right now, we only know of one habitable planet (ours), and we view it in a very different way (much closer) than we view any other contenders.

But most exciting for NASA is the purpose expressly in the project’s name: Gateway. It’s much easier to support missions to Mars and other deep space destinations if they have a base beyond low-Earth orbit. Gateway provides an easier waystation for sample return missions from the moon or Mars, with or without human crews.

And, at the very least, Gateway allows space agencies and companies to practice launching and returning cargo and crews from greater distances than are currently possible, with only ISS and other Earth-bound platforms for target practice.