NASA's Next Observatory Will Stare at the Sun; Predict Solar Storms 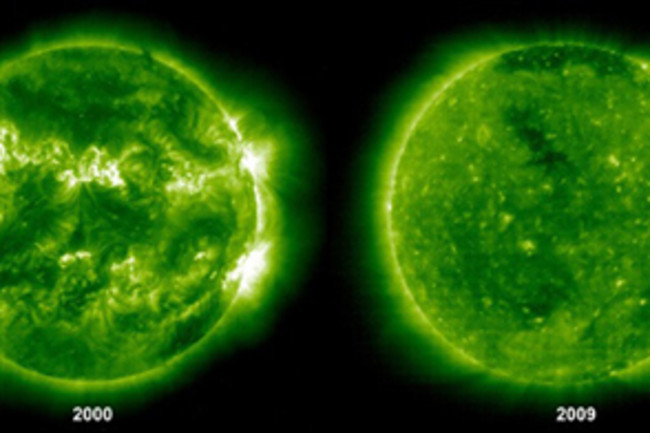 While astronomers continue to learn about peculiar phenomena in distant galaxies, our own sun's behavior still presents a mystery. So NASA's next mission, the Solar Dynamics Observatory, will watch every move the sun makes in the hope of fully figuring out its cycles of sunspots, solar flares, and other activity. Set to launch next week aboard an Atlas V rocket, the SDO will snap 60 high-resolution images of the sun every minute.

Using three specific science instruments, SDO will measure how much extreme ultraviolet light the Sun emits, map plasma flows in the Sun, map the surface of its magnetic field, and image the solar atmosphere [Astronomy]

. Scientists hope this huge catalog of images, taken at a resolution far better than that of HDTV and measuring about 1.5 terabytes of data per day, will help them connect the flares and spots on the solar surface to what's happening down below, inside the star. Barbara Thompson, the SDO project scientist, says connecting cause and effect in the sun will help us know what's coming, and how it will impact life on Earth.

“We know things happen on the sun which affect spacecraft, communications and radio signals. If we can understand the underlying causes of what is happening then we can turn this information into forecasts" [The Times]

. Astronomers have observed the sun's cycles for centuries. It oscillates between minimum and maximum number of sunspots over the course of about 11 years, and reverses its magnetic field on a 22-year cycle. But the sun can break its patterns, thwarting scientists trying to predict its activity with greater accuracy. The most famous example is the Maunder Minimum, when few sunspots at all appeared on the sun between 1645 and 1715. The most recent minimum was unusually quiet, too, for reasons that perhaps the SDO's future observations could explain. Better understanding of the sun's rhythms is critical not simply for scientific curiosity; peaks of solar activity can disrupt the communications and power systems that we all rely on. A 1989 magnetic storm shut down power grids in Canada and the United States, and one of the most powerful of all time disrupted telegraph systems in 1859. The current solar cycle has the British concerned:

After a period of unprecedented calm within the massive nuclear furnace that powers the Sun, scientists have detected the signs of a fresh cycle of sunspots that could peak in 2012, just in time for the arrival of the Olympic torch in London [The Independent]

. Look out, Olympic broadcasters: Here comes the sun. Related Content: 80beats: After an 18-Year Mission, the Solar Probe Ulysses Retires 80beats: Astronomers May Have Cracked the Case of the Quiet, Spotless Sun Bad Astronomy: Here comes the Sun(spot)! has more on the recent sunspot findings DISCOVER: Space Weather and the havoc it can cause DISCOVER: Seeing Sun Storms in Stereo Image: SOHO/NASA/ESA