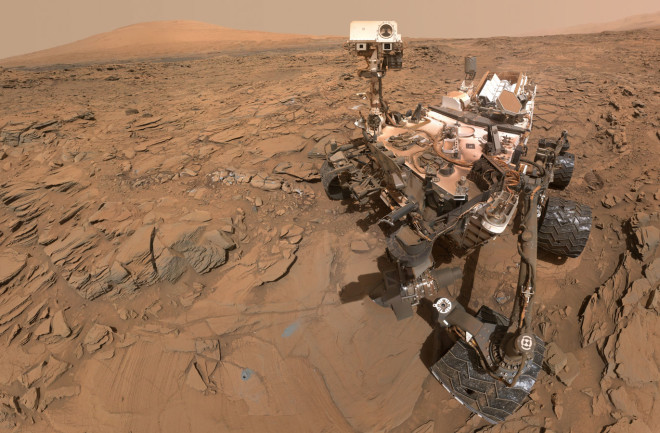 This 2016 Curiosity rover selfie shows the vehicle at the "Okoruso" drilling site on Mount Sharp's Naukluft Plateau. The Martian scene is a mosaic of images taken with the arm-mounted Mars Hands Lens Imager (MAHLI). (Credit: NASA/JPL-Caltech/MSSS) A team of researchers managed to repurpose a movement-detecting device that helps NASA’s Curiosity rover navigate and use it to measure variations in the Red Planet’s gravitational field. In the process, the scientists discovered that the rocks beneath the rover are more porous than previously suspected. This offers clues into the mysterious formation Mount Sharp, a strange hill the rover has been exploring in the center of Gale Crater. “This study is a little bit of the first of its kind,” said study author Kevin Lewis of Johns Hopkins University. “It’s the first gravity traverse on the surface of another planet other than the Earth and the moon.” On Earth, geologists commonly use such instruments to study rocks lurking beneath the surface. But on Mars, researchers could only get this kind of gravity data from orbiting spacecraft, which are too far away to get a detailed picture. So scientists and engineers worked together to essentially give Curiosity a new scientific instrument -- even after more than six years on the Red Planet. As Lewis explains, gravity is really just acceleration. And Curiosity is equipped with accelerometers -- like the ones commonly used in iPhones and other electronics -- which are used both to drive and get the vehicle’s orientation. So, by using the rover’s accelerometers, the team was able to measure varying gravitational "tugs" from subsurface rock layers. “Gravity measurements ... provide a magnifying lens into one particular area of the planet's subsurface," Travis Gabriel, a team member and graduate student at Arizona State University, said in an email. "This is why surface measurements of gravity are a staple tool in an Earth geologist's toolbelt.” So, by sending Curiosity to climb Mount Sharp, a 3-mile-tall (5-km-tall) mountain in the middle of Mars’ Gale crater, the team was able to uncover the density of the area’s rocks and how Mount Sharp likely formed.

In the past, researchers thought the floor of Gale Crater was probably buried beneath miles of rock long ago. “If you look through a telescope at the moon, you'll notice central peaks in most of the large craters - Gale Crater is no different,"Gabriel said. "However, (Gale's) central peak stands taller than the crater's rim, which leads scientists to believe it was filled to the brim with sediments at one time.” So it came as a surprise when Curiosity’s gravity data showed this idea just isn't possible. That's because the rocks there have a surprisingly low density, even though the actual minerals in the rocks are fairly dense. This implies the rocks are riddled with empty pockets that make them porous. If Gale Crater had ever been filled to the brim, those pores in the rocks would have been essentially “squished out,” as Lewis put it, beneath tons of rock. “We think Gale Crater was filled only partially, providing a critical piece of the puzzle that is the history of Gale crater and the ancient environmental conditions at the equator of Mars,” Gabriel added. Instead, the team suggests winds may have blown debris into the crater in the warmer day hours and out of the crater during the cold night, gradually forming Mount Sharp over many millions of years. And this probably won't be the last time we hear about Curiosity "new" gravity instrument. “In our analysis, we also demonstrated the capacity of the accelerometers to measure martian earthquakes, which is yet another technology demonstration with these units and can provide new insights in the subsurface of Mars in the future,” Gabriel added. The research will be published in the journal Science onFriday,Feb. 1.