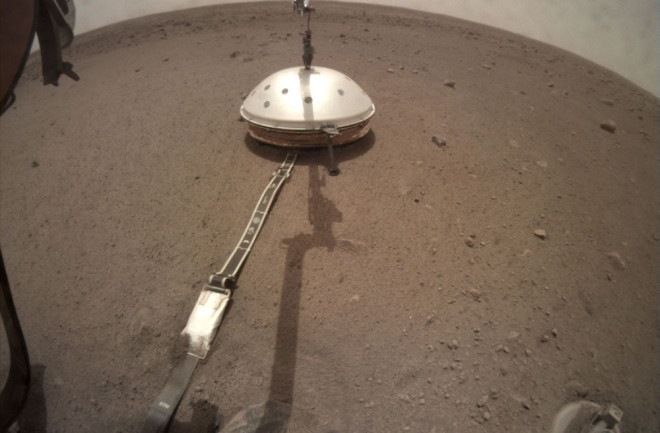 The InSight lander installing the wind and thermal shield on the planet's first surface seismometer. NASA. We know surprisingly little about seismicity (on Earth it would be earthquakes) on other planets. Although we have done a little seismology on the Moon, both "listening" for natural temblors or creating our own, beyond that, we haven't had much luck. Sure, the 1970s Viking landers had seismometers as part of their array of instruments, but they were sitting on the deck of the landers, not placed on the ground, so almost no useful data was collected. The newest Mars lander, InSight, is there to remedy this problem. The NASA mission landed on Mars in December 2018 with the goal of learning as much as possible about the Martian interior. Mars doesn't have anywhere near the geologic activity of Earth. So far, we have never witnessed any volcanic activity on Mars and the most recent volcanism might have been a million years ago or more. There is no obvious flowing water on the surface of the planet save for some evidence of ephemeral springs in craters. The carbon dioxide ices at the poles do change with Martian seasons, as does the frequency and intensity of the massive dust storms — but that activity is restrained to the surface. There is no evidence of anything like Earth's plate tectonic system, now or possibly even in the past 3 billion years of Martian history. Evidence for that comes from the massive Martian volcano Olympus Mons, which appears to be the product of a hotspot, much like Hawai'i. However, instead of a chain of volcanoes that formed as the Pacific Plate moved over the Hawaiian hotspot, all the lava erupted from Olympus Mons appears to have piled up in one location, suggesting few moving plates like on Earth (but maybe not a complete lack of tectonics). Our plate tectonic system on Earth is also what drives most of our earthquake activity. Each day, hundreds of earthquakes happen all over the globe, many too small to feel but a few each day are strong enough to be noticed. You plop a seismometer down anywhere and it will record the tremors caused by these earthquakes all over the planet as the seismic waves resonate through the solid parts of the Earth. So, back to Mars! InSight has had its seismometer deployed for a few months now and the fourth planet is quiet. Up until recently, there were only a few small shakes felt by the instrument that may or may not have been tiny marsquakes. However, on April 6, the seismometer recorded an event that was most definitely a true marsquake -- the first confirmed temblor on other planet. This marsquake was so small that Earthbound seismometers would likely not have even noticed it amidst the cacophony of weather and human-induced shaking that happens all the time. However, on a seismically moribund object like Mars, InSIGHT detected this slight tremor. What caused it? It might have been movement on a fault, maybe caused by cooling and shifting rocks inside the planet. It could also have been caused by a meteorite impact somewhere on Mars. Further analysis of the data might point us in one direction or the other. InSight's seismometer is all alone, so it is difficult-to-impossible to do things like determine an exact location or depth for the source of the marsquake. On Earth, seismologists do that sort of thing by looking at data from multiple seismic stations to triangulate the location and determine what kind of motion might have happened: extension, compression or transform (side by side). Really, what this record of a marsquake represents is a remarkable technological feat: we launched a seismometer to Mars, landed it, deployed it and now it can record very minute shaking on another planet. Sure, there aren't the thousands of earthquakes like we find on our home planet (and it would have been shocking to find that there were), but we can now begin to get an better picture of how geologically active Mars might be. So far, it seems like the Red Planet isn't hopping, but it does still have some shaking left to do.