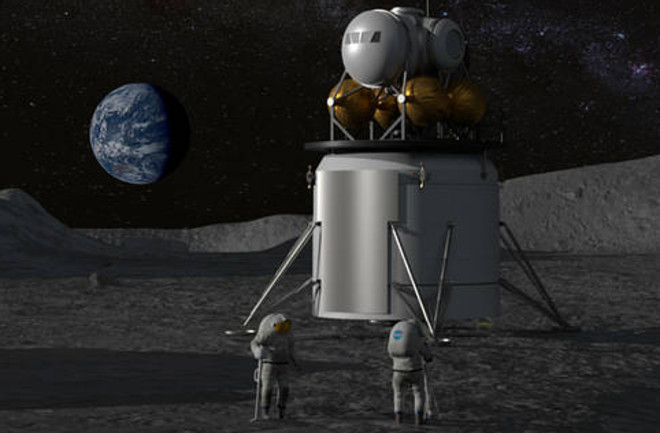 NASA has big plans for returning to the moon, but private companies will do much of the work. (Credit: NASA)

In November, NASA tapped nine private spaceflight companies who will be allowed to bid on upcoming projects. Yesterday, they elaborated on what those projects would be during an industry forum. Starting as early as this year, NASA hopes to send commercial landers to the lunar surface as the first step toward returning to the moon, this time for good.

There’s a lot of work to be done before permanent or long-term lunar activities can begin. The first tasks will be to practice launching and landing on the moon, as well as answering questions about its surface. There’s plenty of technology NASA wants to see established on the ground before humans are sent back to the moon – and a lot of it is meant to stand in for future Mars settlement as well.

Some of that technology has to do with a recent buzzword among the space settlement community: in-situ resource utilization, or ISRU. This means using materials and resources already available on the moon and, one day, Mars, rather than carting all our resources with us, as has been standard for space missions. This most commonly means using solar power for energy. On the moon, it will also mean extracting water, which can be used for drinking or to power rockets. Both the hydrogen and oxygen that make up water are powerful fuel materials.

So commercial lunar partners will work on how to mine and recycle resources on the moon and make them available for future mission use. They will test habitation for future crewed missions. They’ll prove that they can collect materials from the lunar surface and return them to space or Earth. And they’ll establish communication networks between robots on the moon’s surface, way stations in lunar orbit, and mission control on Earth.

All these commercial endeavors would also need to integrate with NASA’s planned Lunar Gateway. This would be a space station in orbit around the moon that would serve as Grand Central Station for robotic or crewed missions to the lunar surface, or even for deep space missions. NASA hopes to open the Gateway by 2026, with the first power and propulsion elements entering orbit in 2022.