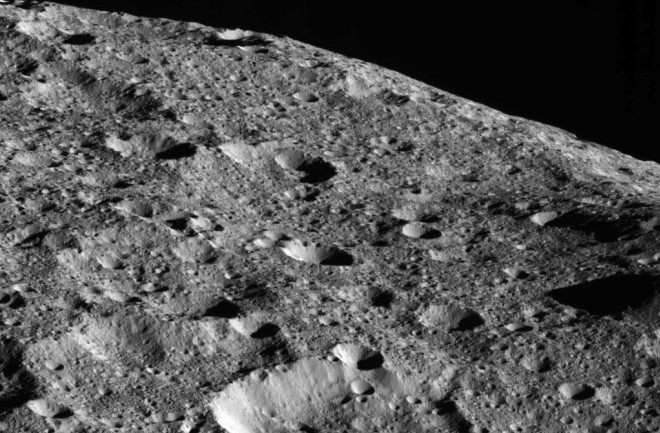 NASA's Dawn mission caught this view toward Ceres' horizon before lowering to an orbit just dozens of miles above the dwarf planet's surface. (Credit: NASA/JPL-Caltech/UCLA/MPS/DLR/IDA)NASA’s Dawn spacecraft has entered its nearest orbit ever to the dwarf planet Ceres, an icy body in the asteroid belt left over from the formation of the solar system. And Dawn is already turning up stunning results. The latest images sent back by the spacecraft were captured just 22 miles above a site called Occator Crater. Before June, Dawn was orbiting hundreds of miles over the surface. This bright region first stood out to astronomers when Dawn arrived at Ceres in 2015. While much of the dwarf planet is dark, the crater's center has several strange reflective spots that were easily visible from orbit. Scientists suspected that these formed as a mixture of salt and ice erupts onto the world's surface. Astronomers call this process cryovolcanism. These new observations help confirm that those bright spots are the indeed the result of cryovolcanism. The salty material is sodium carbonate, or soda ash. And astronomers say it likely welled up from a reservoir of briny water below the surface of Ceres and spewed onto the surface. Going forward, the new orbit should give Dawn a view of what, if any, geologic activity is happening on Ceres today. The world is about one-fourth the size of Earth's own moon.

Dawn’s new orbit is also one of the closest shaves of any NASA orbiter. The Lunar Prospector previously orbited the moon at just 20 miles above the surface of that body, and a few others have dipped below that line but not survived. The Dawn spacecraft was originally launched in 2007. It arrived at the asteroid Vesta in 2011, where it studied that body in depth and found features associated with ancient water flows. It also found evidence of a massive collision that fragmented Vesta into its present potato-like shape. In 2012, Dawn used its experimental ion engines to set a new course for Ceres, entering orbit in 2015. This made Dawn the first object to orbit two different bodies beyond the Earth-Moon system. Dawn will stay in its new orbit for the duration of its mission, drawing out more and more details of Ceres. What was once believed to be the largest asteroid has now been revealed as a relict protoplanet that once had a since-frozen over ocean. In its new orbit, Dawn may also be able to detect if there are parts of an ancient ocean still left liquid under the surface, however unlikely. If that’s the case, Dawn could be added to the list of places life might exist, or have existed, beyond Earth.