NASA Selects PUNCH, a New Mission to Study the Sun

The 2022 mission PUNCH will learn more than ever about the complex relationship between the sun’s outer layers, the corona, and the heliosphere. 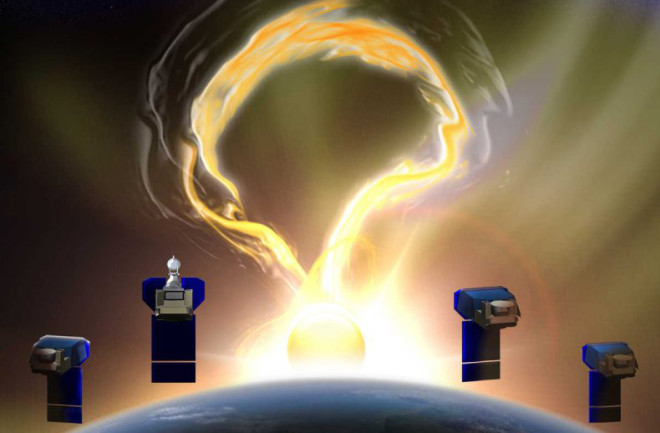 The PUNCH mission will include four microsatellites that work together to watch the entire heliosphere. (Credit: SwRI)

The sun powers life on Earth and keeps us from freezing to death. It also occasionally sends out bursts of charged particles that can be deadly to astronauts outside Earth’s sheltering atmosphere, and also wreak havoc on electronics both on and above Earth. There’s also a lot researchers still don’t understand about the sun’s behavior, including how its outermost layer gets so blisteringly hot. So scientists are justifiably concerned with trying to better understand and predict solar events.

To aid in that effort, NASA just approved their latest mission to study the sun, dubbed PUNCH: The Polarimeter to Unify the Corona and Heliosphere. Launching in 2022, the mission will be made of four separate spacecraft that stare continuously at the sun and inner solar system. PUNCH will learn more than ever about the complex relationship between the sun’s outer layers, the corona, and the heliosphere, the sun’s range of influence that encompasses Earth and extends all the way past Pluto.

PUNCH is a small mission by NASA standards, costing no more than $165 million, including its launch costs. But it will do big work. After launch, the mission will separate into four separate probes, each one no larger than a suitcase. Orbiting roughly along Earth’s terminator – the line between day and night – the satellites will spread out around the globe and stare continuously toward the sun.

One of the probes will carry a narrow-field imager to study the corona itself, the sun’s blistering outer layer. The other three will have identical cameras looking at a wider view to study solar weather, or the impact the sun has on the space around it. All four of them will be looking at polarized light from the sun. When sunlight strikes electrons – charged particles – that float freely in space, that light becomes polarized, meaning the light waves align, instead of being randomly distributed. (Imagine the shape of a snake slithering along the ground, or the shape a jump rope makes.)

PUNCH Principal Investigator Craig DeForest, of the Southwest Research Institute, explained in a statement: “That polarization effect lets us measure how solar wind features move and evolve in three dimensions, instead of just a 2D image plane. PUNCH is the first mission with the sensitivity and polarization capability to routinely track solar wind features in 3D.”

PUNCH, which will orbit close to Earth, only 350 miles up, will work in cooperation with NASA’s Parker Solar Probe, which skims much close to the sun itself, and also the joint European Space Agency/NASA Solar Orbiter mission that is due to launch in 2020.

Together, they hope to unravel some of the sun’s mysteries, including how the solar wind forms and moves. They also hope a closer study will lead to a better understanding of the causes of solar weather events like coronal mass ejections (CMEs), which can hurl charged particles into Earth’s path, damaging satellites and disrupting electrical grids and power systems on Earth. Right now, these events are difficult to predict, and humans have scant time to react if a CME appears. By better understanding the causes of these dramatic events, scientists hope they can learn to better predict them and mitigate any damages.