Astronomers have long suspected debris from the asteroid Phaethon causes the annual meteor shower. Now, NASA’s Parker Solar Probe has captured the stream of space debris where the shower originates. 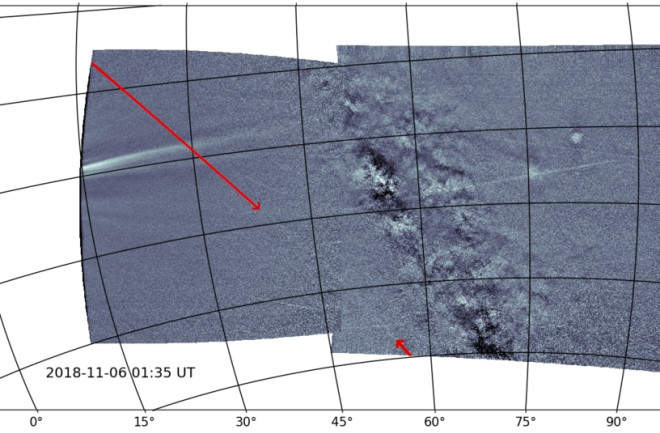 NASA's Parker Solar Probe spotted the source of the annual Geminid meteor shower as a faint stream of debris, seen here as a line between the red arrows. The debris band stretches for millions of miles and causes a meteor shower every December when Earth passes through it. (Credit: Brendan Gallagher and Karl Battams/NRL)

NASA’s Parker Solar Probe is starting to unlock new information about the annual Geminid meteor shower, whose origin has been a bit of a mystery to astronomers.

Every December, the Geminids grace the night sky with bright streaks. The Geminids are special because they’re just one of two meteor showers not caused by a comet. And some astronomers suspected the nighttime display is an offspring of the asteroid Phaethon, which soars by the sun about the same time as the meteor shower.

Phaethon, being an asteroid, shouldn’t produce a meteor shower like it does. There are a lot of questions surrounding how an asteroid has a debris trail following it, and some researchers have wondered if something violent happened in the past to create the Geminids.

During its first close encounter in November 2018, the Parker Solar Probe observed faint space dust that was about 62,000 miles wide and about 12.5 million miles long, following Phaethon. This line of dust was in the Geminids’ expected orbit, leading astronomers to believe that it was actually the Geminids, viewed from space for the first time.

The Parker Solar Probe’s main objective is to study the Sun, and since its launch in August 2018, it has discovered new information about the solar wind and the sun’s magnetic fields as it continues to study our closest star.

However, because we can normally only see the meteor showers as streaks from Earth, the probe offers a new lens through which to see the showers. Once astronomers get more data on the mass and distribution of the material that makes up the Geminids dust stream, they’ll be able to run computer simulations to find out how the material came to be. The discovery announcement, made on Dec. 9 at the fall meeting of the American Geophysical Union, was well timed. The Geminids are expected to peak Dec. 13 and 14, allowing everyone to wonder a bit more about their origin.