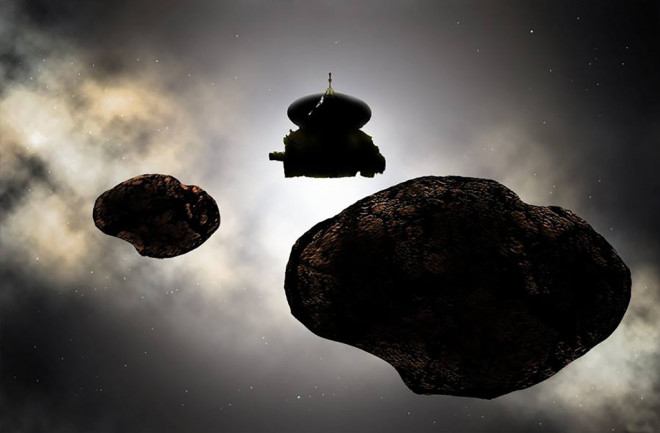 An artist's illustration of New Horizons zooming past its next target on New Year's Day 2019. (Credit: NASA/JHUAPL/SwRI/Carlos Hernandez) NASA needs your help. The New Horizons probe, which flew past Pluto two years ago to much fanfare, is heading towards another, even more distant world — (486958) 2014 MU69. It's a maddeningly boring name, and it just doesn’t quite capture the adventure, the thrill, the awe of an earthly spacecraft visiting an object over 4 billion miles away. But if you act now, you can help give the target a more fitting nickname. NASA announced earlier this week they’ll be looking to the public for suggestions on what to name the distant world — or possibly set of worlds (it’s so far and so tiny astronomers aren’t super sure if it’s just one object or possibly more). So share your ideas, or vote on other peoples’ suggestions, before Dec. 1. Of the established candidates, I’m partial to Uluru myself, though Mjölnir is also pretty catchy. But what about Mickey, the one who goes after Pluto all the time? If the past is any indicator of what's to come, don't be surprised if we settle on Worldy McWorldface. Anyway, NASA and the New Horizons team will decide on a favorite and announce the winner in early January. It’ll be the object’s de facto name until the actual flyby, scheduled for New Year’s Day 2019, a little over a year from now. Then, based on what they find, the scientists will choose an official, permanent name for the world(s). It’s not the first time NASA has crowdsourced a name. They’ve asked the public to help come up with names for features on Pluto, Mars rovers, and even exercise equipment. Clearly, they appreciate the wisdom of the masses, so hopefully we’ll rise to the challenge with New Horizons’ next destination.