NASA Hunts for Life on Europa

Probe could be launched within 10 years, arriving at the Jupiter moon as early as 2026. 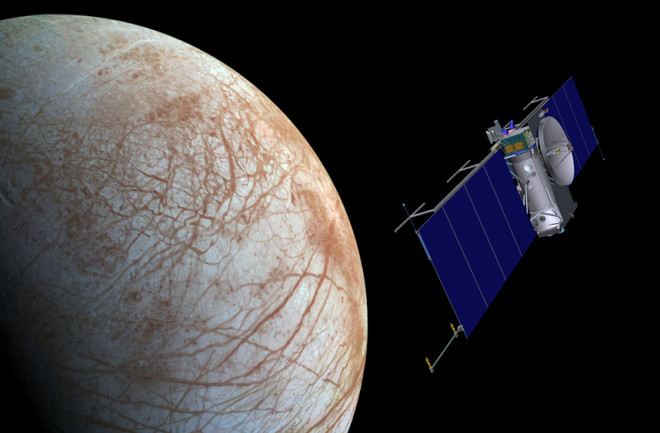 A NASA probe may study Jupiter's moon Europa for signs of life within a decade. | NASA/JPL-Caltech

Sign up for our email newsletter for the latest science news
A NASA probe may study Jupiter's moon Europa for signs of life within a decade. | NASA/JPL-Caltech

Life on Earth likely emerged in the deep ocean, where simple organisms fed off toxic gas from volcanic vents. Earth’s oldest ecosystems have inspired NASA to send a probe to search for signs of life in even harsher climes: Jupiter’s ocean moon Europa. After NASA selected the mission’s instruments in May, it officially moved the probe into development in June, setting the stage for a possible 2022 launch.

A cross section of the moon’s surface shows its layer of icy crust above a liquid water ocean. | NASA/JPL-Caltech

Scientists have long suspected a process similar to that around Earth’s volcanic vents takes place beneath Europa’s fragile icy shell, making the moon one of the most promising locations to find extraterrestrial life.

Depending on the probe’s final configuration and launch date, it could reach Europa as early as 2026. With 45 close approaches — including some just 15 miles from Europa’s surface — the probe will finally provide some answers, studying the moon’s interior and taking pictures as good as the best close-ups of Mars from orbit.