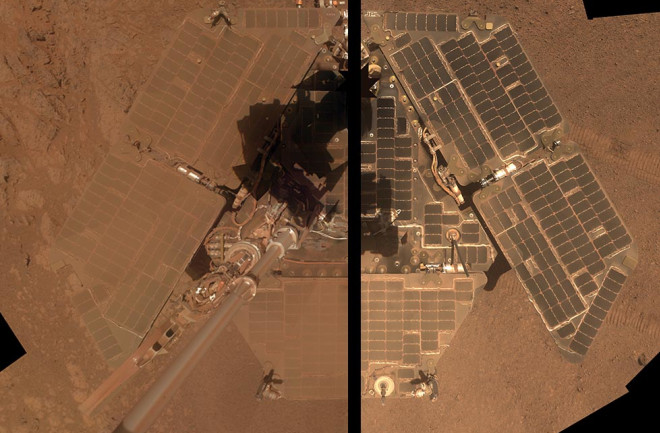 After 10 years on Mars, Opportunity accumulated a thick coat of red dust, as seen in the self-portrait on the left in early January 2014. But the thin Martian atmosphere does have wind, and two months later, that wind blew much of the dust off the spacecraft, thus improving the performance of the solar panels that gather power for the rover. (Credit: NASA/JPL-Caltech/Cornell Univ./Arizona State Univ.)

On January 24, 2004, the Opportunity rover sent back its first signal from the Red Planet. That marked the start of a 90-day planned mission for the six-wheeled, golf cart-sized rover. Fifteen years later, the rover’s mission has finally ended, NASA announced today.

Its longevity and discoveries are a testament to Opportunity’s design and construction. The rover ultimately sent back more than 200,000 raw images and traveled a total of 28 miles (45 kilometers), farther than a standard marathon and an accomplishment its mission planners never expected.

Beyond the design performance, Opportunity’s findings have helped researchers reconstruct Mars’ wet past, raising the possibility that microbial life could have survived on its ancient surface.

Opportunity and its twin, Spirit, “gave us a planet,” Scott Maxwell, former rover planning lead for Spirit and Opportunity, told Discover. “They were our eyes and ears, our remote robot bodies.”

But on June 10, 2018, after outlasting Spirit by eight years, Opportunity fell silent under the shroud of a planet-encircling dust storm. By February 6, NASA reported that more than 835 recovery commands had been sent to the rover over a span of frequencies, including those outside its normal communications range. None had been answered.  According to the mission site, this was the team’s “strategy of last resort.”

Today in a press conference at 11 A.M. PST, NASA announced the completion of the Mars Exploration Rover mission. “Our beloved Opportunity remains silent,” said Thomas Zurbuchen, associate administrator of the Science Mission Directorate, NASA Headquarters, during the conference.  Zurbuchen was present Tuesday night during a final planned attempt to reach the rover Tuesday evening, asking the rover to respond. But no response came, prompting NASA to conclude that she remains asleep, and her mission can now be honored as a resounding success.

“Today we get to celebrate the end of this mission,” said NASA administrator Jim Bridenstine. He went on to say that scientists will be benefitting for years from the data taken during Opportunity’s 14 years spent roving the Red planet.

As of January 24, Opportunity — with an original mission plan lasting just 90 days and covering only about 1,100 yards (1 km) of distance — had clocked 15 years on Mars. The rover had long surpassed both its original three-month warranty period, and its twin rover, Spirit, which fell silent in 2010 from a location NASA named “Troy,” on the western side of the Home Plate plateau. Spirit, which suffered wheel damage, became stuck at Troy and was unable to collect sufficient sunlight during the following Martian winter, similarly suffering a lack of power and cold damage.

By early last June, the rover’s location, in “Perseverance Valley” on the western rim of the crater Endeavour, had been engulfed by a growing dust storm. That storm clouded the red Planet’s skies with dust and blotting out the Sun. Opportunity, which relied on sunlight to charge its batteries and keep its electronics warm, went to sleep as a protective measure against the prolonged period of darkness. But even after the skies above it began to clear in early August, the rover slept on.

By September 11, the atmosphere above the rover’s location had cleared enough for adequate sunlight to reach the rover’s panels, provided they were relatively free of dust.  It also started the clock on a 45-day period that NASA believed would be the best window of time for getting a response from the rover.

Throughout that period, NASA’s Deep Space Network continued to broadcast commands to the rover, which likely suffered a number of “faults” due to the prolonged lack of sunlight. By consistently actively pinging the rover during both preplanned recovery times and other random intervals, engineers had hoped to catch Opportunity during an awake period.

But following the final planned attempt, NASA has now concluded that Opportunity will remain silent and stationary at her final location.

“There’s probably no more fitting way for her to have gone than in the strongest dust storm we’ve ever seen on Mars — for her, I would expect nothing less. Now she can rest, beneath a thin layer of dust, knowing she did humanity proud,” Tanya Harrison, director of research for the Space Technology and Science Initiative at Arizona State University and science team collaborator on Opportunity, told Astronomy.

“Spirit and Opportunity may be gone, but they leave us a legacy,” said Mike Watkins, director of NASA’s Jet Propulsion Laboratory, during the press conference. The Mars Exploration Rovers, he added, “energized the public about the spirit of robotic Mars exploration.” Their legacy, he said, will live on with the enthusiasm and support for not only Curiosity, currently exploring Mars, but the upcoming Mars 2020 mission as well.