Intuitive Machines is one of three companies announced today that will land NASA science experiments on the moon within the next two years. 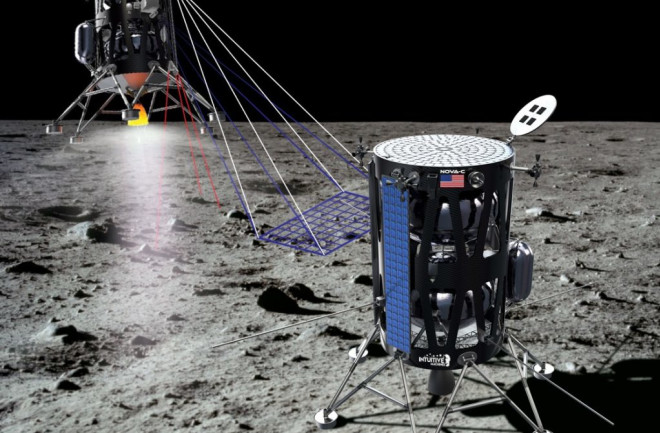 During a NASA press conference Friday, Thomas Zurbuchen, associate administrator of the agency’s Science Mission Directorate, introduced the first three of nine companies awarded contracts to deliver payloads to the moon over the next few years.

Those companies are Astrobiotic of Pittsburgh, Intuitive Machines from Houston, and Orbit Beyond, located in both Edison, New Jersey and Daytona, Florida. The contracts for all three total about $250 million.

The landers are small, roughly as tall as a human and capable of carrying small science experiments weighing up to ten pounds. They represent the first step in NASA’s Artemis program to return to the moon.

Science on the Moon

Each company is building a lander capable of delivering multiple payloads to the moon as part of NASA’s Commercial Lunar Payload Services (CLPS). These payloads would be various science and technology experiments, designed by both NASA and commercial partners.

Many of these experiments focus on volatiles like water, which can be used for fuel or to sustain life during crewed missions. Previous missions have examined the moon’s water ice, but scientists need to learn more in order to best utilize it for future missions.

NASA also hopes to accomplish basic astronomical research with CLPS experiments, such as learning about the history of the solar system, which is well-preserved on the moon’s largely unchanging surface.

The docket also includes experiments aimed at testing and demonstrating technologies that could be useful for future lunar missions. These include an Earth-to-Moon laser communication system, manufacturing tests on the moon’s surface, and various designs for providing power on the moon.

Two of the companies, Intuitive Machines and Orbit Beyond, plan to launch on a SpaceX Falcon 9 rocket, while Astrobiotic has yet to decide which launch company it will use. All three companies already have launch dates and landing sites in mind.

Astrobiotic plans to take off in June 2021, landing the following month in Lacus Mortis, a large crater on the moon’s near side. They are slated to fly up to 14 payloads.

Intuitive Machines wants to launch in July 2021, landing six days later with up to five payloads. They’re targeting either the Sea of Storms or the Sea of Tranquility, just east of where Apollo 15 landed in 1971. Spokespeople from the company pointed out that their lander also includes solar panels and can provide power and communications to any payloads attached to their spacecraft.

Orbit Beyond will carry four payloads to the Sea of Rains, and plans to land first, in September of 2020.

None of these regions are near NASA’s eventual crewed target of the moon’s South Pole-Aitken Basin, but the agency stresses that part of the CLPS program is exploring multiple different sites on the moon to keep their experiments diverse.

The companies also addressed the dangers of flying budget missions to the moon, as the Israeli Beresheet mission recently demonstrated with its landing failure. They acknowledged that the descent and landing phase is tricky and likely the most dangerous. But all of them point out that they are testing to learn about potential dangers, and that their critical systems have enough redundancies to conquer the most likely failures.

Future flights of the landers could potentially feature scaled-up versions of the spacecraft to bring full-size rovers and large science experiments to the moon.

The first launch will happen in just over a year if they keep to schedule.