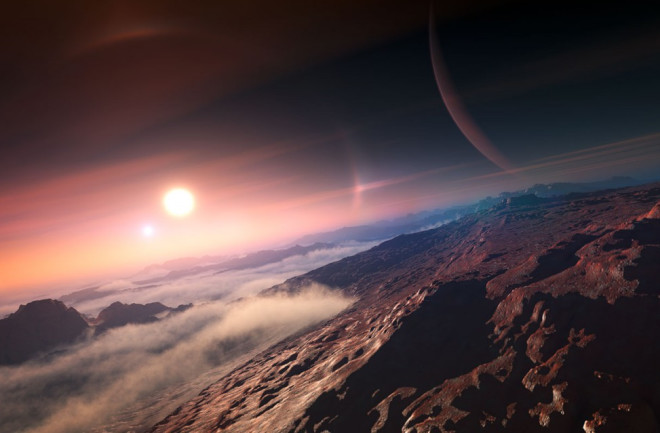 Artist's rendering of an exoplanet seen from its moon. Courtesy IAU/L. Calçada Everyone knows it’s not always cool to follow the rules, and even less cool making sure everyone else does. So it’s not surprising the International Astronomical Union has a bit of a bad rap. First they take away Pluto’s planetary status, then they started grumbling about groups trying to give exoplanets and Martian craters cool new names. Well, it seems the ol’ IAU’s taken a bit of a chill pill, because it’s just announced a new contest that will allow the public to vote on a set of up to 30 such popular names for exoplanets and their stars.

Putting the "You" in IAU

In a move foreshadowed in a recent story for this very magazine, the IAU will let people to vote on exoplanet system names... but only up to a point. The extrasolar systems under consideration, 305 well-known and thus older (discovered before 2009) stars and their planets, will be narrowed down to 20-30 by non-profit astronomy groups that have previously registered. These groups also get to suggest the names for these “exoworlds,” as the IAU calls them, and then starting in March 2015 anyone can vote on their favorite choices. The winners will be announced at a special ceremony during the next IAU General Assembly meeting in Honolulu in August 2015. (For the full details, and to sign up your group or yourself to vote, go here.) This isn’t the first time the august IAU has mellowed a little. Last year, the astronomical group chose the names of Pluto’s newest-found moons — Styx and Kerberos — based on an Internet poll. Still, it’s amusing to see exactly how far the organization is willing to relax. The suggested names can’t be longer than 16 characters, can’t be named after living or divisive figures (anyone known for political, military or religious activities), and perhaps least chill of all, can’t be named for a pet animal. Sorry, Laika. The name has to be pronounceable, but only "in some language,” so at least there’s a little leeway for Klingon.

A Star System is Born

So the next time someone says the IAU can’t ever loosen up or have fun, just point them to this 13-month-long heavily regulated and official information-gathering campaign on what the public would like to name certain preselected exoplanetary systems (which will in no way affect official, scientific designations)! Heck, even put like that, it still sounds pretty cool. I’ve already signed up, and hope to vote for Osiris and Methuselah — that is, HD 209458b and PSR B1620-26 — next year. Any favorites you hope to see in the coming months? Tell us in the comments!