Warning! This blog entry contains nudity. Sortof. And it's mine, so really: beware. A little while back, I did something I rarely do: shower in the afternoon. I'm a morning showerer because it helps wake me up and it relaxes my old stingy muscles. But this time I broke with tradition, and showered after lunch. It was a warm, cloudless day, so I opened the little window in the shower to let in the sunlight and enjoy the warm afternoon air streaming in. When I looked down, I got a surprise! No, not shrinkage. When I looked down, I saw... a rainbow. Now, I'm no stranger to apparitions in my shower. But this surprised me. A rainbow, in the shower! How delightful!

But why did it surprise me? Geometry, that's why. In general, to see a rainbow, the Sun has to be behind you. That's because a rainbow is caused when the sunlight is bent twice inside a raindrop. Together, those two bends send the light almost back in the direction it came; actually about 140 degrees. In other words, if your back is to the Sun, the rainbow will be 180 - 140 = 40 degrees in radius, centered on the direction opposite the Sun (this explanation might make more sense). So to see a rainbow, you have to have your back to the Sun. But in my shower, the geometry was different. I was facing the Sun, more or less. But after some thought (I do some of my best thinking when sprayed with hot water), I realized this all made sense. The window was above my head, and I was looking down. So in a sense the sunlight was coming from behind me. That 40 degree difference from 180 is what made it visible at all, floating above my belly. For the picture I took above, I wound up facing a different direction to get the best angle on the rainbow. Satisfied, I continued my ablutions. Then something else caught my eye. As I looked straight into the shower stream, I saw lots of droplets flashing colors, especially red: 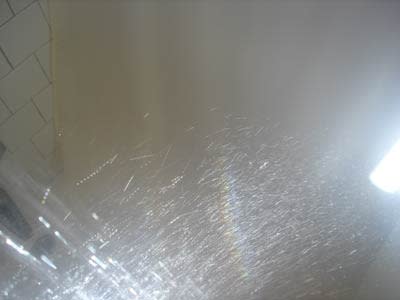 The rainbow in question. The rainbow is at the bottom middle of the image. The Sun is well off to the upper left in this image (maybe 130 degrees to the left as I took the shot), and the bright spot is the direct sunlight hitting the shower curtain.

These colored droplets were well away from the critical 140 degree rainbow angle. I'm still not sure what caused them. I didn't use a flash for the picture, and I did see the colors with my own eyes. So I have one solved and one unsolved mystery. But I did learn one important thing: naked science is fun! Almost the most fun thing you can do in a shower. 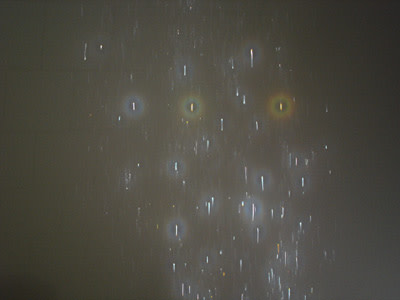 The colored drops in question. I took this picture facing the stream, with the Sun above me and90 degrees to my left. The lens of the camera fogged up, which is causing the fuzziness and halos.