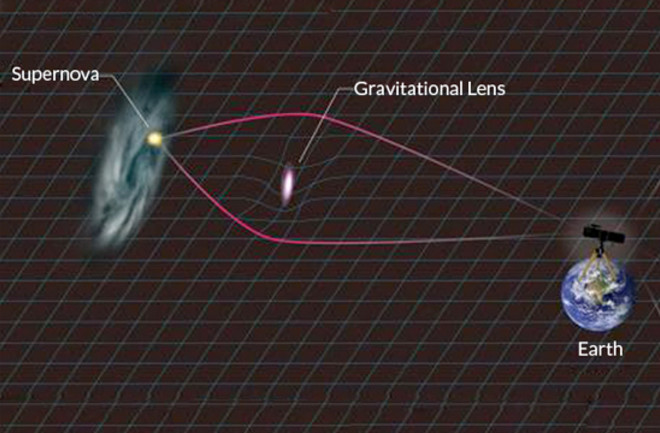 Schematic illustration of the magnification by a galaxy. A massive object between us and the supernova bends light rays much as a glass lens can focus light. As more light rays are directed toward the observer than would be without the lens, the supernova appears magnified. Credit: Kavli IPMU Looking through space for distant stars, galaxies and anything else is hard. But luckily, sometimes the universe itself lends a helping hand, in the form of a galactic-sized magnifying lens. The real trick is being able to spot this weird interplay of light and gravity, but thanks to a recent superbright supernova, scientists now have a much better handle on this phenomenon.

Let’s start at the beginning. In 2010, scientists discovered a supernova named PS1-10afx, a stellar explosion that took place in a galaxy about 9 billion light-years away. It was no ordinary supernova. Most of its characteristics made it look like a specific kind of blast known as a Type Ia supernova, except it was 30 times too bright. Nothing could really explain PS1-10afx, so at first researchers thought it might be a new kind of supernova. That’s when things got complicated. Last year, another set of scientists suggested that PS1-10afx might be a Type Ia supernova after all, with the extra brightness coming from a gravitational lens. That’s the name astrophysicists have given the phenomenon where a massive object, like a galaxy or black hole, distorts the light from a more distant object. Just like a glass lens distorts light in a number of ways, these gravitational lenses can lead to some weird effects, including, say, magnifying the brightness of a distant supernova. It’s a fine idea, but the science world wanted proof, and now, in this week’s edition ofScience, the researchers have provided it. By searching the distant galaxy where PS1-10afx exploded and the area around it with Hawaii’s Keck telescope, the team found a new, previously hidden galaxy. It was closer, only about 8.5 light-years, and made up of dimmer stars, explaining why previous observations had missed it in the glare of PS1-10afx's galaxy. After analyzing the nearer galaxy’s characteristics, it turns out it’s perfectly positioned to act as a gravitational lens for the supernova, magnifying its light by the right amount. PS1-10afx truly was just a regular ol’ Type Ia supernova.

From a Star to the Universe

That’s good news for supernova fans, who like their explosions to make sense. It also means future supernova hunters will be that much better equipped to search out their prey, because they'll recognize the different forms a supernova can take, and can learn to anticipate the unseen obstacles that might actually be in the way. And in a bigger sense, this work also sheds light on how the universe itself works. Type Ia supernovae are special because they all explode the same way, so when astronomers find one, they can use its colors and brightness to tell how far away it is. This impacts our understanding of the size of the cosmos and how fast the universe is expanding outward. And knowing all the quirks and strange things that can happen to a supernova’s light goes to the very heart of that understanding.