Mushroom-Like Inflatable Heat Shield Could Be a Spaceman's Best Friend 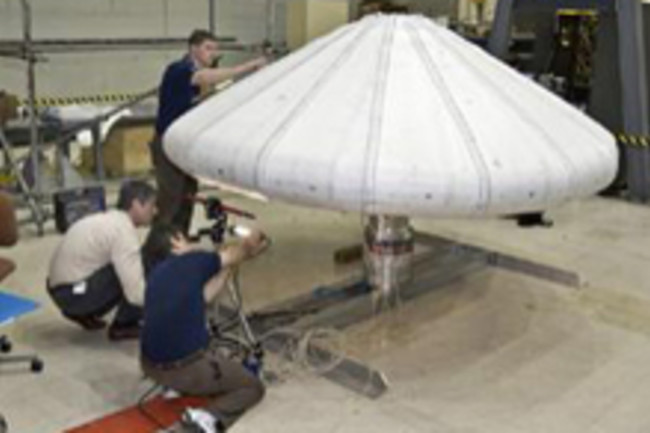 NASA has successfully tested an inflatable heat shield for the first time, which could offer an excellent alternative to the rigid heat-resistant tiles and carbon coatings used by current spacecraft. On Monday, NASA engineers

The inflation system, which lead scientist Neil Cheatwood calls "a glorified scuba tank," filled the shield in less than 90 seconds. The shield then fell back to Earth, surviving the fiery reentry into the atmosphere and splashing down in the Atlantic. The experimental system offers several potential advantages. The fragile heat-resistant tiles that cover the space shuttle need frequent inspections and repairs to prevent another tragedy like the 2003 breakup of the Columbia, while the inflatable shield could be stowed safely away until its needed. The inflatable shield's

low mass also allows spacecraft to carry more or heavier payloads. "Right now the rigid ones are at the weight limit of what we're trying to send to Mars," [engineer Robert] Dillman says. "If you want to take larger payloads to Mars, they'll have to either do something quite creative or switch to an inflatable" [New Scientist].

Cheatwood says the successful test is the culmination of many years of work.

"Inflatables have been proposed for decades, but the materials weren't there back then." ... The Russians planned to use an inflatable heat shield on a Mars probe launched in 1996, but the spacecraft was lost due to an upper-stage rocket failure. NASA's first attempt to demonstrate an inflatable shield, likewise ended prematurely due to a problem with the launcher [Discovery News].

The shield is comprised of multiple layers of fabric made from a heat-resistant ceramic fiber, and inner layers of silicon-coated Kevlar that holds air like a balloon. Now that NASA has completed a successful test, researchers will work on building bigger, stronger shields capable of withstanding the full brunt of

"smacking into the atmosphere at interplanetary speed" [New Scientist],

as Dillman describes it. Related Content: 80beats: 40 Years After Moon Landing, a Question Remains: What Next? 80beats: Work Starts on Spaceport America, the Tourist’s Gateway to Space 80beats: Next Mars Rover Won’t Take Off Towards Mars Until 2011 80beats: Even Beyond Disintegration, Shuttle Utterly Failed to Protect AstronautsImage: NASA / Sean Smith