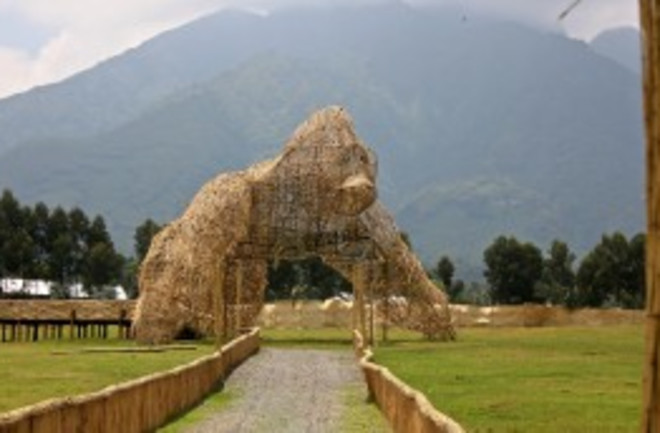 A gorilla sculpture celebrates Rwanda's ecotourism industry in Volcanoes National Park. (Image: Jeffrey Marlow) Mountain gorillas are big business in the Virungas, the majestic volcanic mountain range that is shared between the Democratic Republic of the Congo and Rwanda. And nowhere is this more evident than in Musanze (also known as Ruhengeri), the gateway to Volcanoes National Park in northwest Rwanda. Musanze is a mecca of gorilla conservation: The Dian Fossey Gorilla Fund International and The International Gorilla Conservation Program are based here. The local university has a specialized ecotourism degree program, and loitering students eagerly practice their English and touristic salesmanship on passing mzungus. Gorilla statues and profiles are the default logo, for everything from the Gorillas hotel to the local tennis club. “These animals are everything to us,” says Felix Sibomana, a guide who escorts tourists on any number of park excursions, from cave tours to mountain climbs to gorilla treks. “Everyone comes here for this special experience, and we can’t let that gift be wasted.” Official estimates suggest that 85% of the tourism industry is gorilla-centric, and the sector grew by 34% from 2014 to 2015. Last Tuesday, for example, all 91 of Volcanoes National Park’s allotted gorilla tracking permits were sold, for $750 each, bringing in a cool $68,250. In one day. Things are a bit different a few kilometers to the west; Virunga National Park in the Democratic Republic of the Congo had just six tourists, each paying $400. There are two obvious reasons for the discrepancy: community buy-in and the broader economic context. Ever since a 2005 revenue-sharing initiative started feeding 5% of national park revenue back into adjacent villages, more than $1.8 million has bolstered hundreds of community development projects, from road construction to small business loans. On the other hand, this positive feedback loop of conservation and ecotourism – more pristine environments generating more revenue, encouraging local populations to keep the ecosystem intact – has yet to complete a full revolution in Virunga, though recent implementation of a mixed model incorporating strategic exploitation and practical conservation seems to be making headway. Musanze has also been buoyed by the region’s most dynamic economy: Rwanda has boasted a mean annual GDP increase of 7.7% over the last 15 years (compared with the DRC’s 4.7%). With other opportunities and the infrastructure to enable mobility, it’s easier to dissuade people from pillaging the forest. But in the villages surrounding Virunga National Park north of Goma in the DRC, there are no obvious alternatives: if you want a more prosperous life, farm expansion – at the expense of untouched jungle – is the most straightforward option. So if the bad news is that Virunga is just starting its journey toward community-supporting ecotourism, the good news is that the model seems to work, for people and gorillas alike. Over the last 35 years, the mountain gorilla population has nearly doubled to 880 – they’re still designated as “critically endangered,” but things are certainly moving in the right direction.

A mountain gorilla eats breakfast in Virunga National Park. (Image: Jeffrey Marlow) Another factor in the resurgence is a bushwhacking team of veterinarians known as the Gorilla Doctors. Dr. Julius Nziza works with the group; splitting his time between Kigali’s Department of Veterinary Services and the Gorilla Doctors’ Musanze office, Nziza is always on call. Humans, it turns out, are a triple threat to mountain gorillas, instigating bodily harm through hunger (snares used to trap bushmeat), hatred (machete or bullet wounds from poachers), or love (cuddle-seeking tourists can transmit human diseases – especially the flu – for which the gorilla’s immune system is woefully unprepared). When Nziza’s phone does bring news of an ailing gorilla, it’s likely a call from a tracker or a ranger. “They spend every day with the family, so they will tell us if they see an abnormal situation,” he explains, “like if an animal is coughing a lot, or lethargic.” According to Nziza’s estimates, the Doctors have saved approximately a hundred animals since the group’s inception in 1986. Maintaining a dedicated team of doctors for the mountain gorillas may seem like a capricious luxury, particularly in a region where human health is far from optimized. But given their outsized importance as an economic engine, “every individual matters,” says Nziza. “And these technical medical tools are helping to sustain the population.”