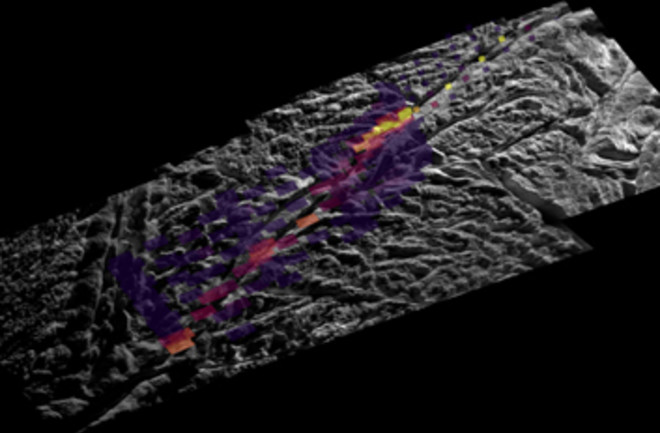 Water, water everywhere. Another pass of Saturn's moon Enceladus, made by the Cassini spacecraft last November, shows at least 30 geysers blasting water from the moon's south pole. That's 20 more than were previously known at that location.

In addition, the most detailed infrared map of one of the south pole's fissures, where jets emanate, indicates that the surface temperature there might be as high as 200 kelvins (-73º Celsius), or about 20 kelvins warmer than previously estimated [Discovery News]

. Cassini drew to within about 1,000 miles of Enceladus to measure this geological feature, which is a fracture--one of the moon's so-called "tiger stripes"--about a quarter-mile deep officially called Baghdad Sulcus. While 200 kelvins is still a frigid temperature for we humans, research team member John Spencer said it could make a big difference on Enceladus.

“The huge amount of heat pouring out of the tiger stripe fractures may be enough to melt the ice underground,” Spencer said. ”Results like this make Enceladus one of the most exciting places we’ve found in the solar system” [Wired.com]