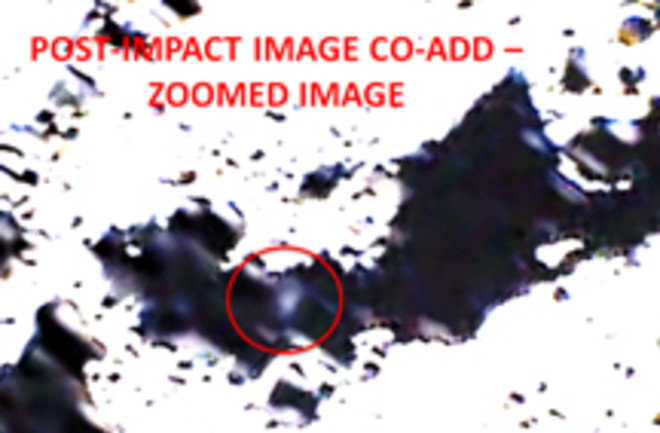 The lack of fireworks after a NASA probe struck a crater on the moon's surface disappointed observers watching from Earth, and many initially questioned the mission's success. However, new images

This is almost exactly what the mission's engineers had in mind when they proposed slinging an empty rocket hull into a crater at the moon's south pole, so that the LCROSS probe that followed could analyze the dust plume for traces of water

ice. Researchers had initially predicted a 6-mile-high plume that would be visible from Earth's observatories, but they're presumably thankful for what they got.

Related Content: 80beats: So What Exactly Happened With That Crashing Moon Probe? 80beats: Lunar Impact! NASA Probe Slams Into Moon to Search for Water 80beats: NASA to Moon: We’re Back. Got Any Ice?

A movie screen at the Ames Research Center in Northern California was set to show the impact from the vantage point of a camera on board LCROSS, but the crowd walked away disappointed when the impact produced no visible plume of dust and debris.

At the time, NASA scientists said they hoped the problem was simply that cameras aboard the satellite were not properly adjusted to detect the plume. But some scientists feared the Centaur might have hit bedrock and failed to create a plume. The new images, lifted from a different camera aboard the spacecraft, show that a plume did, in fact, occur. That means the satellite should have been capable of detecting water, if it was present [Los Angeles Times]. Scientists said it's still too early to say what was in the plume, but other clues, such as the heat generated at the impact sight, should help the scientists interpret the data over the next few weeks.