Darryl Cunningham, who took down homeopathy and Andrew Wakefield in comic form, has turned his attention to the Moon Hoax. His cartoon about it is very well done and worth checking out. 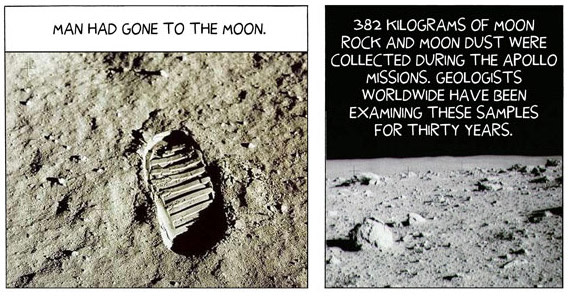 At TAM8 I was accosted by an honest-to-Armstrong Moon Hoax believer. I was surprised, as this particular species is very close to extinction, even in the wilds of places like YouTube. Perhaps I'll tell that tale in detail sometime, as it was interesting, but suffice to say that while I was happy to be interviewed by him at first, his persistent and accusatory sideswipes at me (and My Close Personal Friend Adam Savage™) at the meeting quickly grew tiresome, and I told him to go away. I would've talked to him, but it was obvious that he couldn't take "no" for an answer -- he clearly had an arsenal of things he wanted to confront me with, and I knew if I engaged him I'd never get away from him. It was a matter of return on investment; spend an hour or more debunking his claims, or go have skeptical fun with friends I only get to see once per year during the short time we're together at TAM. Hmmmm... but too bad. It would've been interesting to talk to him about all this, but he made it impossible.