Friends back in my home state of New York have been telling me about a 'monster' that supposedly washed up on the beach in Montauk, Long Island. Intrigued, I checked out the now famous photograph after the story appeared on CNN. Take a look: 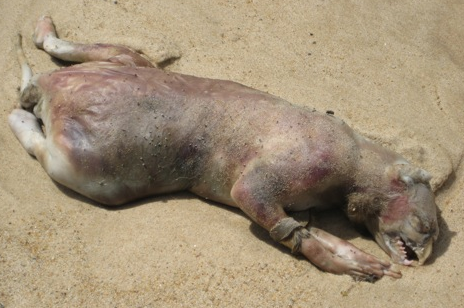 Unfortunately, while I love a good creature mystery as much as anyone, I'm disappointed. The first thing to note is we have no perspective for scale and I'd be surprised if it was more than a couple feet long. Further, what's being called a 'beak' are more likely canine teeth, which suggest a decomposing carnivore. Now I haven't checked in with the guys at Zooillogix yet, but my guess is--despite that our 'monster' looks like a critter from Harry Potter--it's probably a dog or raccoon. What do readers think?