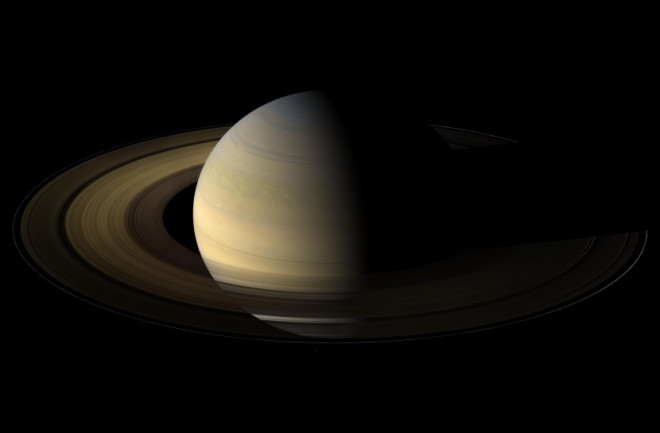 NASA/Cassini: Images taken from space like this one of Saturn by the Cassini spacecraft can find their way into JPL infographics Scrolling through the infographics webpage at the Jet Propulsion Laboratory or JPL at the California Institute of Technology in Pasadena, California, feels like browsing through a digital science museum. You can click on anything from interactive graphics detailing the history of space exploration to sprawling posters on exoplanets. Over the past two years, JPL has been inviting graphic designers to blend art and science to create these visual features drafted from images sent back from spacecraft or 3D models conjured up at JPL. Graphic designer Justin Moore and Jon Nelson, JPL’s online content manager, started the project to bring planetary science to the general public. Nelson says that in the past, JPL’s science presentations were too technical and difficult for people outside of the JPL community to understand. He wanted to find a way to present the information in a way that was going to be easy and engaging. The way Moore tells it, infographics seem like the ideal medium to communicate space and planetary science. Moore says that in this field, the photography of alien landscapes and artistic depiction of missions to distant planets are already compelling. “The imagery is very powerful,” Moore says. For one, “the images coming back from Mars are pretty amazing" and lend themselves well to this type of work.

Justin Moore: The head of a JPL Infographic depicting the descent of the Mars rover Curiosity Using some of these images, Moore created an infographic that chronicles the descent of the Mars rover Curiosity onto the red planet in 2012. The graphic is a long vertical column that depicts Curiosity plummeting through the atmosphere and past images of the Martian terrain. On the left, a strip of text narrates the rover’s engineering and landing. Moore says he designed the graphic to elicit the grand sense of scale and impact around the rover’s landing. “We needed to create this kind of visceral effect,” Moore says. The infographics often connect the art with the science. Kim Orr, an infographics artist and a web producer at JPL, designed a timeline infographic for the Deep Space Network, a system of large dish-like antennae which communicates with spacecraft and collects data from space. Orr drew inspiration from the physical nature of the communication, constructing the body of the timeline like a radio wave beaming out to space. “It ties in very nicely with the timeline because as they go out into space, these waves expand and get a little weaker and all of that,” Orr says. It makes the “visuals are just as important as the text in telling this story.”

JPL-Caltech/Kim Orr: 50 years of deep space communication Nelson says that the infographics can take a little “really nice imagery and just a little bit of data to tell a really great story that anyone can understand.” So far, it seems that they’ve succeeded at doing just that. The infographics are catching on, both in social media, and garnering some attention from book and textbook writers. Most of the participants in the project are designers, but Nelson wants to see if any artists, amateur or professional, “want to be part of these infographics.” Anyone can sign up with JPL to access data or images and make their own. Orr and Moore both say that they wanted to be involved with the infographics because they wanted to reach out to a wider audience. But Orr says the real joy with the infographics is capturing the awe of space, rather than just relaying interesting facts about the universe. “[Infographics are] a mix of that and a mix of just wanting to create something beautiful,” Moore says. “It’s finding that harmony between creating a beautiful graphic and communicating the information in an intuitive way.” *** JPL Infographics is one of more than 800 projects on SciStarter, an online hotspot for citizen science participants and project owners. Find projects that suit your interests using our Project Finder or add your project to our database to recruit participants!