I heard on the radio several times in the past few weeks commentators refer to minority opposition to gay marriage, specifically the fact that New York and California have large numbers of blacks and Latinos who are voters. I was curious if Latinos really are notably more opposed to gay marriage than non-Hispanic whites. So I looked in the GSS. I limited the data to the years 2006 and 2008 for the variable MARHOMO, which asks:

Do you agree or disagree? j. Homosexual couples should have the right to marry one another.

The sample sizes for the groups are as follows: Non-Hispanic whites = 2,292 Non-Hispanic blacks = 402 Mexican Americans = 309 Results below. 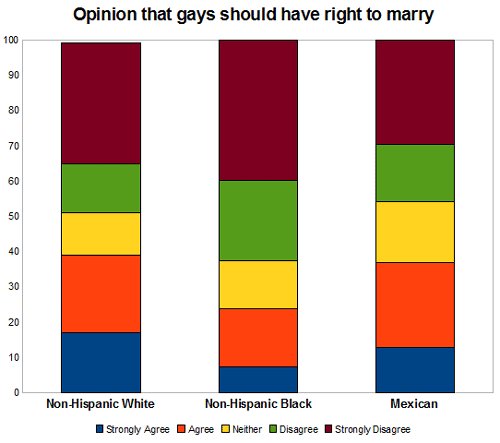 Using a scale where those who "strongly agree" with gay marriage = 0 and those who "strongly disagree" = 4, and weighting the proportions, you get a mean value like so: Non-Hispanic White 2.24 Black 2.71 Mexican American 2.26 Mexican Americans are much more like Non-Hispanic whites when it comes to this issue than they are like blacks. Ethnic minorities should not be thrown into the same bin. For what it's worth, Non-Hispanics of "Other Race," almost certainly mostly Asian Americans, are even more supportive of gay marriage than whites. Note: I used Mexican Americans because the sample sizes for other Latino groups was very small in the GSS. Puerto Ricans, who are the dominant group in New York, may be more socially conservative, I do not know.