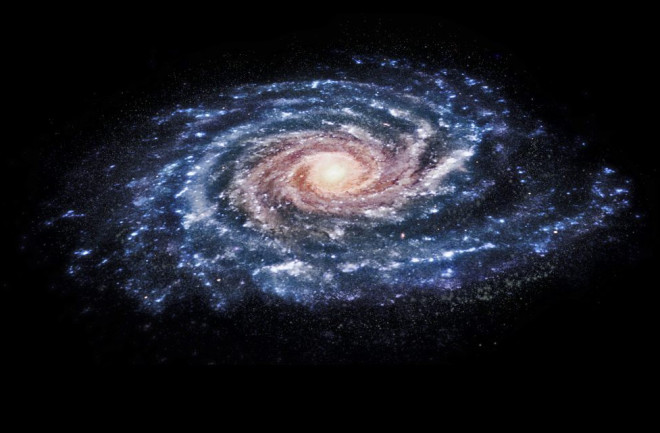 A new study of stars in the Milky Way reveals evidence of a cosmic near miss collision with a smaller galaxy sometime in the last billion years. (Credit: ESA) Our Milky Way galaxy holds hundreds of billions of stars. Many of those suns were formed locally from clouds of gas — at the rate of handful every year —over billions of years. But our home galaxy gets stars another way, too. It steals them. The Milky Way has cannibalized smaller galaxies throughout the eons, adding them to our cosmic ranks whenever one strays too close. But sometime in the past billion years, one of those meals got away — though the struggle left a mark. A new study published Wednesday in Nature has tracked the motion of more than six million stars in our galaxy using the European Space Agency’s Gaia spacecraft. The research reveals that the Milky Way nearly collided with another nearby galaxy — called the Sagittarius dwarf galaxy — sometime in the past 300 to 900 million years. This cosmic “fender bender” set millions of stars moving like ripples on a pond, the authors say.

The European team of astronomers behind the discovery says they were able to pick out the event because the Gaia spacecraft doesn’t just accurately measure the positions of stars; it also precisely picks out how fast they’re traveling across the sky. Teresa Antoja of the University of Barcelona led the team. And she says she could hardly believe her eyes after she plotted the star positions and their movement on her computer. A surprising, snail shell-like pattern appeared on her screen that looked unlike anything astronomers had seen before. “At the beginning the features were very weird to us,” Antoja said in a media release. “I was a bit shocked and I thought there could be a problem with the data because the shapes are so clear.” But once they verified their results, it became clear that these stars really were following strange and distinct paths as they orbit the galactic center. And this same sort of pattern is known to form in other physical systems during so-called “phase mixing.” They were able to recreate the pattern with computer models in which our galaxy nearly collides with another galaxy and some of the Milky Ways’ stars are set in motion. “It looks like suddenly you have put the right glasses on and you see all the things that were not possible to see before,” Antoja said. The shape wasn't the only thing that surprised them. Scientists knew that the Milky Way has seen many collisions over its 13.5 billion year history. But they thought that was ancient history. "Many such collisions happened in the past," says study co-author Amina Helmi of the University of Groningen in the Netherlands. "However, most of these should’ve taken place a long time ago, as the disk of the Milky Way appears to be relatively unperturbed." This discovery changes that view.

After they found the cause, the team set out hunting for the object our galaxy may have nearly collided with. There was an obvious suspect: The Sagittarius dwarf galaxy, which packs tens of millions of stars, is in the process of being cannibalized by the Milky Way. And the two galaxies last passed by each other in the same time range astronomers think the strange pattern formed. But it’s not quite case closed just yet. The scientists say their work is still largely based on simple computer models, so they’ll next dive into a detailed analysis of the strange shape. “The full understanding of its meaning and implications might take several years,” Helmi says.