Migrating Monarchs Bring Out Citizen Scientists in the Holiday Season 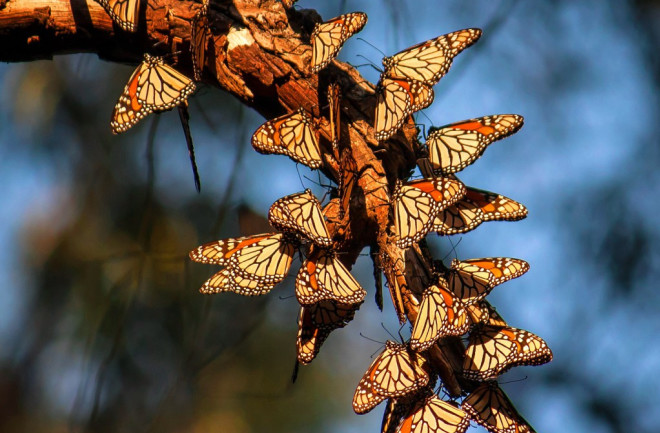 by Eva Lewandowski Every autumn, the western North American population of monarch butterflies migrates from the lands west of the Rocky Mountains to the coast of California, where they spend the winter at about 200 sites scattered throughout the coastline. Last winter, I had a chance to visit the Monarch Grove in Santa Cruz, California, where thousands of monarchs were resting in eucalyptus trees and occasionally fluttering about in search of water or nectar. As a monarch conservation biologist who entered the field only after the monarch population plummeted in size, seeing the monarch overwintering in California was an amazing sight. In just one glance, I was able to see more monarchs in Santa Cruz’s Monarch Grove than I normally see in an entire summer. Unfortunately, even the thousands of monarchs I saw were just a fraction of the numbers once found at that overwintering site. Despite the declining monarch population, many of the overwintering sites up and down the California coast are popular spots for tourists who, like me, want to see monarchs en masse. But, tourists aren’t the only people visiting the groves; citizen scientists with the Western Monarch Thanksgiving Count (WMTC) go to these sites in order to count the number of monarchs present. Candace Fallon, a conservation biologist who coordinates the WMTC, says that citizen scientists with WMTC provide a “comprehensive, long term data set for the overwintering population.” The data they collect allow scientists to estimate the number of the western monarchs, and were recently used in a scientific paper^1 detailing the population decline of western monarchs The WMTC runs from November 14 to December 6, but volunteers are encouraged to visit their sites in January and February as well, in order to account for any movement or changes in the population during the winter. While the overwintering population can be somewhat dynamic, in general it is much easier for scientists to estimate the size of the population during the winter months than during the summer breeding season. During the summer monarchs are spread throughout the western states and can be difficult to locate and monitor; however, during the winter, the monarchs move much less and the locations of many groves are known. In addition to visiting known monarch overwintering groves and counting or estimating the size of the population there, citizen scientists can also report the presence of new or heretofore unknown overwintering sites. Fallon has received reports of possible new overwintering sites in the northern part of California, but she notes that the sites will need to be monitored throughout the winter to determine if they are truly acting as season-long overwintering sites. Data collection for the WMTC is currently underway, and Fallon expects that citizen scientists will visit and record the number of monarchs at more than 130 sites throughout the state, a task that is only feasible through the power of citizen science. As she describes it, “It would not be possible to monitor the number or breadth of overwintering sites that are currently included in the WMTC without our volunteers. Citizen scientists really are the foundation of our monarch monitoring efforts at overwintering sites in California... It's pretty incredible what a group of empowered citizens can do to enrich our knowledge of a species!”

Eva Lewandowski is a PhD candidate in the Conservation Biology Graduate Program at the University of Minnesota. She is part of the Monarch Lab, where she studies citizen science and conservation education. In her free time, she volunteers with environmental education and wildlife rehabilitation. ^1 Jepsen, S., and S. Black H. 2015. Understanding and Conserving the Western North American Monarch Population. Pages 147-156 in K. S. Oberhauser, K. R. Nail and S. Altizer, editors. Monarchs in a Changing World: Biology and Conservation of an Iconic Butterfly. Cornell University Press, Ithaca.