Microbes are More Social Than You Think, But Not Always in a Good Way 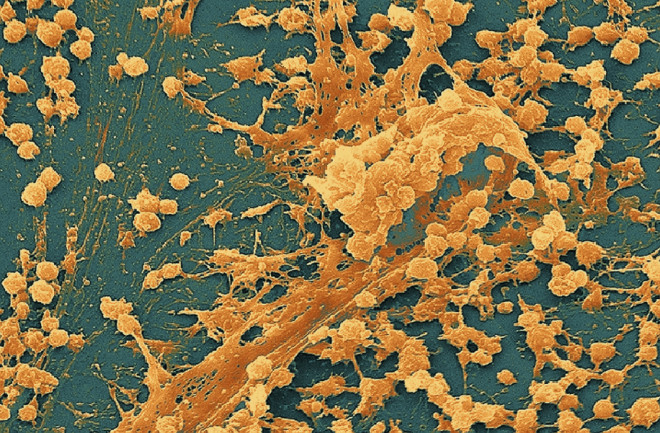 Biofilms, where multiple species co-exist in close proximity, may be the default mode of microbial life on Earth. (Image: NIH, ~30 microns across) Microorganisms may seem like simple beings, miniscule entities floating through a flash-in-the-pan existence. And yet, despite their diminutive size and limited genomes, microbes live remarkably social lives, by turns shunning, attacking, embracing, and ignoring their neighbors. In a recent article in Nature Reviews Microbiology, Carey Nadell, Knut Drescher, and Kevin Foster highlight these interactions, focusing on the fraught dynamics of biofilms. Biofilms are dense, coherent communities of microbes bound together by a web of sugar molecules. Many of the slimes you may encounter in daily life, from pond scum to sink drain coatings, are actually robust, diverse microbial metropolises. These powers of agglomeration can be used for good – efficient nutrient cycling or the progressive breakdown of complex pollutants – or for bad – stubborn contamination of industrial facilities or pernicious lung infections – so figuring out how to promote or disrupt biofilms is an important line of research. There’s also a growing consensus that these tightly bound communities may actually be the norm in the microbial world. “Microorganisms are thus fundamentally social organisms,” Nadell writes, and their interactions “are pivotal to how they affect the world around them.” Social though they may be, Nadell presents biofilms as a cliquish world where you hang out with your friends and keep everyone else at arm’s length: at best, you ignore them; at worst, you attack. Staying close to genetically similar organisms makes sense when you’re spewing enzymes out beyond your cell wall. These molcules are energetically expensive to produce, and once they’re out of your purview, anyone can capitalize on their food-generating potential. To avoid giving competitor species a free lunch, many species only give the green light once a critical mass of clones is nearby. But surprisingly, the enzyme-exporting benefit may be based not only on genetic similarity of organisms’ 16S ribosomal RNA genes (the well-conserved genetic marker generally used to identify an individual), but on the gene responsible for the molecule in question. Such interactions point to a broader conservation of function: if genetically identical clones are the best neighbors, perhaps other organisms performing similar functions in the community aren’t a bad second choice. By capitalizing on public goods, “spatial segregation” within a biofilm seems to be the preferred way of life, and interspecies mixing can mean trouble. Antibiotic production is perhaps the best known form of chemical warfare, but other approaches are more specialized. The pathogen Proteus mirabilis, for example, expresses a devastating one-two punch when looking to assert itself. One: a type six secretion system that uses a syringe-like structure to puncture neighboring cells and inject debilitating toxins. Two: motility machinery to attack other nearby cells, creating some breathing space available for grazing. The apparent preference to cohabitate with clone-mates leads to a challenging series of questions that researchers are just starting to grapple with. Why even develop diverse, intermixed biofilms in the first place? Does the occasional exchange of beneficial genes, or the formation of mutually useful symbioses, outweigh the constant squabbling? Or is the physical scaffolding of cells in a particularly attractive region just happenstance, the common appeal of good real estate? Put simply, is cellular intermixing good in the long run, or are biofilms just a marriage of convenience? Answering these questions could clarify the broader purpose of what may well be the default mode of life on Earth.